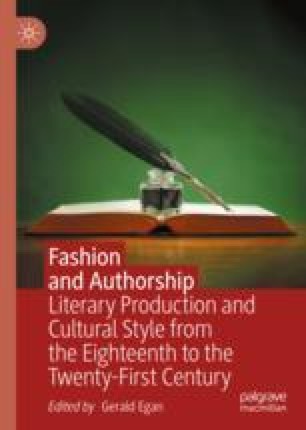 Becoming Somebody: Refashioning the Body Politic in Mary Robinson’s Nobody

In 1794, Mary Robinson—author, celebrity figure, and former actress and mistress of the Prince of Wales—debuted her new comedy Nobody at London’s Drury Lane Theatre. It caused a near-riot. This chapter maintains that allusions in Robinson’s drama to “Nobody,” a graphic image often figured as a woman wearing an empire-waist gown with “no bodice,” stage a crisis of embodiment in which the ills of the state are imaged through fashionable folly. The drama provides fresh insight into the politics of fashion, and how authors engaged print media and performance networks to generate suggestion and critique. Moreover, it reveals how Robinson intended, through Nobody, to write herself into being—to rescript her social role from a stylish trendsetter into a respected author.

This essay is an abridged and edited version of “Becoming Somebody: Refashioning the Body Politic in Mary Robinson’s Nobody.” Studies in Romanticism 55.2 (Summer 2016): 143–184, and has been reproduced with the permission of the Trustees of Boston University.

“Style is social order as lived in the body.”

Cite this chapter as:
Robinson T.F. (2020) Becoming Somebody: Refashioning the Body Politic in Mary Robinson’s Nobody. In: Egan G. (eds) Fashion and Authorship. Palgrave Macmillan, Cham