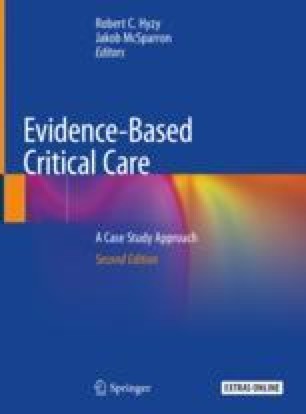 Acute exacerbations of COPD involve increased symptoms such as cough, dyspnea and sputum production. These exacerbations are associated with increased mortality as well as decline in lung function. Non-invasive positive-pressure ventilation (NIPPV) is the preferred method of ventilatory support in respiratory failure secondary to AECOPD. NIPPV reduces work of breathing, improves oxygenation and ventilation and decreases both mortality and the risk of invasive ventilation.

Other therapies for AECOPD include inhaled bronchodilators and systemic glucocorticoids. Antibiotics are recommended for severe exacerbations. Future areas of interest in treatment for AECOPD include utilization of biomarkers and extracorporeal carbon dioxide removal.

A 73 year-old man, current smoker of 50 pack-years, a history of chronic obstructive pulmonary disease (COPD) on home oxygen, and an ischemic cardiomyopathy presented to the emergency department (ED) with shortness of breath. He noted 1 week of progressive dyspnea on exertion and increasing cough with purulent sputum. He denied fever, chills, hemoptysis, orthopnea, paroxysmal nocturnal dyspnea and leg edema. He has been using inhaled bronchodilators several times daily and had increased the flow rate of his supplemental oxygen to 4 liters per minute without notable improvement. On the morning of admission, he had dyspnea, even at rest, and called EMS. On presentation, he was afebrile, tachycardic to 110 beats per minute and hypertensive to 178/90 mmHg; he had a respiratory rate of 36 breaths per minute and an oxygen saturation of 85% on 4 liters per minute of supplemental oxygen via nasal cannula. An ABG drawn while on oxygen revealed: pH 7.24, pCO2 60 mmHg, PO2 55 mmHg. On exam, he was awake, in mild distress, using accessory muscles of inspiration and exhalation. The remainder of his exam was notable for tachycardia, diffuse end-expiratory wheezes bilaterally, and an absence of rales. Chest radiograph demonstrated hyperinflation without focal opacity.

What is the immediate approach to this patient with acute hypercarbic respiratory failure?

Non-invasive positive-pressure ventilation (NIPPV) is the preferred method of ventilatory support in patients with acute respiratory failure secondary to an acute exacerbation of COPD (AECOPD). This patient was placed on bilevel NIPPV with an inspiratory pressure of 12 cm of water and an expiratory pressure of 5 cm of water with an inspired fraction of oxygen of 0.5 via an oronasal mask interface. His oxygen saturation was maintained between 88 and 92%. He was given 500 mg of intravenous azithromycin and 60 mg of intravenous methylprednisolone. Within hours, his respiratory rate had decreased to 22 and he appeared comfortable with improvement in his arterial blood gas.

Diagnosis and Impact of COPD Exacerbations

The natural history of COPD is punctuated by periods of acute exacerbation, during which patients experience increased symptoms and utilize more healthcare resources. Common symptoms of AECOPD include increased sputum production, cough and dyspnea as a result of increased airway inflammation, mucous plugging and gas trapping [1, 2]. Exacerbations of COPD are associated with a mortality of 10% in the hospital, 43% at 1 year and 50% in the subsequent 5 years [3, 4, 5]. Exacerbations themselves are associated with a step-wise decline in lung function and deteriorating quality of life [6]. The most commonly identified triggers for AECOPD are respiratory viruses, particularly rhinovirus, as well as bacterial pathogens and environmental exposures.

NIPPV is indicated in the setting of acute respiratory failure secondary to COPD exacerbation [7, 8]. The goal of NIPPV in this setting is to reduce work of breathing, improve ventilation, correct hypercapnia and prevent intubation. NIPPV avoids many of the risks of invasive ventilation (via an endotracheal tube), including the risk of aspiration, hypotension or trauma during laryngoscopy and placement of the endotracheal tube. In addition, NIPPV preserves airway defenses, which may reduce the risk of ventilator-associated pneumonia and usually does not require sedation or physical restraints. The target oxygen saturation in the setting of a COPD exacerbation is 88–92%, which has been associated with lower mortality compared to non-titrated supplemental oxygen [9].

NIPPV reduces in-hospital mortality in COPD exacerbations in addition to reducing the need for intubation, and hospital length of stay [8, 10]. It has also been shown to reduce respiratory rate and improve respiratory acidosis [11].

Typical settings for NIPPV in COPD exacerbation are bilevel positive pressure support, with an inspiratory pressure set at 8–12 cm H2O and an expiratory pressure set at 3–5 cm H2O. Oronasal mask (covering the mouth and nose) interface is generally used due to known benefits in physiologic parameters and wide availability. If not tolerated, a nasal mask or nasal cushions may be more comfortable, with the caveat that they generally have larger air leaks [12, 13]. Newer interfaces including helmet devices may have added benefit, including patient comfort and the ability to drink while receiving positive pressure ventilation, but are not widely used at this time [14].

Indications and absolute contraindications to NIPPV are listed below. Encephalopathy due to hypercapnic respiratory failure is not a contraindication, but requires the frequent monitoring and follow up of the patient to ensure improvement in mental status and respiratory acidosis in the first hours [15].

“NIPPV failure” is better described as the progression or lack of improvement of respiratory failure despite NIPPV, often leading to invasive mechanical ventilation (IMV) [16]. Approximately 30% of patients with AECOPD treated with NIPPV fall into this category [17]. NIPPV failure is associated with a high mortality. Reported mortality ranges from 13.5% in the ICU to 60.2% and is higher than the mortality of those initially placed on IMV [17, 18].

Inhaled bronchodilators are the mainstay of treatment for COPD exacerbations. Short acting beta-agonists (e.g., albuterol) have proven reliable and quick-acting bronchodilators. No difference has been found in efficacy between short-acting beta-agonists and anticholinergics delivered via nebulizer or metered-dose inhaler (MDI) [19], although nebulizer may be preferred if the patient is in respiratory failure and unable to generate the negative inspiratory force required for optimal MDI medication delivery. Nair et al. found no difference in maximal bronchodilatory response between 2.5 mg/3 mL and 5 mg/3 mL of nebulized albuterol in COPD exacerbations [20].

Short-acting inhaled anticholinergics (e.g., ipratropium bromide) are often used alongside inhaled beta-agonist therapy [7]. Data are mixed whether the combination of anticholinergic and beta-agonists produce bronchodilation in excess of either alone [21, 22].

Neither intravenous methylxanthines nor beta-agonists are recommended for the treatment of COPD exacerbation.

Systemic glucocorticoids should be given to all patients admitted to the hospital for AECOPD. This therapy improves lung function, reduces rates of treatment failure, improves symptoms and decreases length of stay [23, 24]. One systematic review established that ten patients would need to be treated with systemic corticosteroids to prevent one treatment failure [25]. Intravenous corticosteroids offer no advantage over oral therapy, unless the patient cannot tolerate oral medication [26, 27]. Oral steroids should be stopped after 5 days if the patient has improved clinically. In a single randomized-controlled trial, a five-day course of oral prednisone in AECOPD was shown to be non-inferior to a 14-day course [28].

The ideal dose of corticosteroids in COPD exacerbations is unknown. The GOLD guidelines recommend the dose equivalent of 40 mg of prednisone once daily [7]. Published dosing regimens range from 40 mg of prednisone once daily to 125 mg of methylprednisolone up to four times a day [7, 27, 29]. Systemic steroids, especially at higher doses, have been associated with hyperglycemia [30].

Several attempts have been made to define subgroups who may benefit from antibiotics: for example, those with purulent sputum, elevated c-reactive protein (CRP) or procalcitonin. Sputum purulence may be related to bacterial infection, but a clinical benefit from antibiotics has not been established prospectively in this group [32, 33]. Clark et al. showed that an elevated CRP did not reliably distinguish between viral and bacterial infections so is unhelpful in guiding the decision to use antibiotics [34]. Procalcitonin is a promising biomarker, which may help distinguish bacterial and viral infections [35]. Procalcitonin-guided antibiotic use was associated with similar outcomes but less antibiotic exposure in AECOPD [35]. However, more recent data including patients with either pneumonia or AECOPD failed to replicate this finding [36].

The antibiotic choice for COPD exacerbations should reflect local antibiograms and resistance patterns. Typical duration is 5 days [7], which has similar treatment success to 7 and 10 day courses [37].

Although not a treatment for the acute exacerbation, smoking cessation should be addressed in patients who smoke cigarettes and present to a healthcare setting with acute symptoms. Smoking cessation can reduce the frequency of COPD exacerbations by one third [5]. Several effective therapies are available which may promote sustained abstinence from smoking, although a combination of pharmacotherapy with behavioral modifications have the most robust evidence [38].

Extracorporeal carbon dioxide removal (ECCO2R) refers to the removal of carbon dioxide (CO2) from the blood via an extracorporeal gas exchanger. This process, initially explored for the acute respiratory distress syndrome (ARDS), can be part of conventional venovenous (VV) extracorporeal membrane oxygenation (ECMO) or arteriovenous (AV) ECMO [39]. However, more recently, lower flow circuits of only 0.3–1 L/min have been proposed for the purposes of CO2 removal, particularly in AECOPD to supplement NIPPV and prevent the need for endotracheal intubation [39, 40]. One retrospective analysis compared 21 patients with AECOPD who did not improve on NIPPV and were subsequently intubated with 21 patients treated with a pumpless extracorporeal lung-assist device (PECLA). No difference was noted in ICU or hospital stay, though those treated with PECLA had reduction in PCO2, improvement in pH, and required no sedation, allowing them to eat, exercise and communicate [41].

Others have evaluated ECCO2R as a tool to facilitate extubation in patients with AECOPD with some success, though in very small numbers: n = 5 and n = 20, respectively [42, 43]. Other small studies have been published with similar benefits, but reported significant bleeding complications [44, 45]. A recent metaanlaysis concluded that ECCO2R for AECOPD is still experimental, noting both potential benefit, but also serious risk for complications [46]. No prospective randomized trials on the subject have been published, though several are ongoing [40].

There is a high prevalence of pulmonary embolism (PE) in the setting of unexplained AECOPD, ranging from 16–25% [47, 48, 49]. A recent systematic review including 880 patients demonstrated a prevalence of 16.1%, with the majority of the clots located in proximal rather than subsegmental arteries [49]. In this analysis, patients with PE and AECOPD had longer hospital stays and higher mortality. The mechanistic connection between AECOPD and thromboembolic disease is not clear at this time, and there is no established causal link between PE and AECOPD. Clinicians should maintain a high level of suspicion for thromboembolic disease when caring for patients with AECOPD given the known association and implications for management, specifically the need for anticoagulation.