Oil, Institutions and Sustainability in MENA 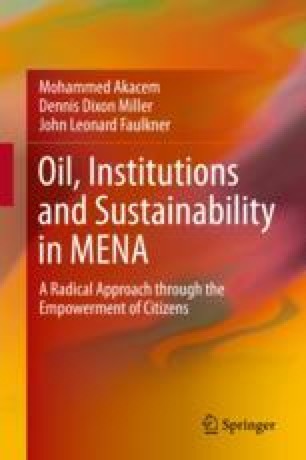 Oil, Institutions and Sustainability in MENA pp 7-17 | Cite as

The world oil markets have evolved since the 1950s when the oil majors were in full control of the market from the MENA’s oil-producing wells to the gas stations in oil-consuming countries. Since then, OPEC has asserted its power, but recently it is facing challenges from the shale oil revolution as well as alternatives and renewable energy sources.

OPEC’s long-term viability and its ability to secure a stable level of oil revenue to its members are now tested by the oil shale revolution. The latter has displaced a number of OPEC members’ oil exports as well as tampered the cartel’s control over oil prices. To make matters worse, the oil producers in MENA consume a large and growing share of their own production due to energy subsidies in an effort to appease the population.

A dilemma facing the oil MENA and the OPEC cartel is that at its core, a cartel’s main goal is to restrict output. Doing so leads to higher oil prices which makes marginal oil wells outside of the MENA region and oil shale more profitable. It also increases investment into alternative sources of energy and renewables. If the cartel chooses to flood the oil markets to lower oil prices and keep shale oil and other marginal producers at bay, it only hurts itself financially with much lower oil revenues.