Faith, Gender, and Activism in the Punjab Conflict 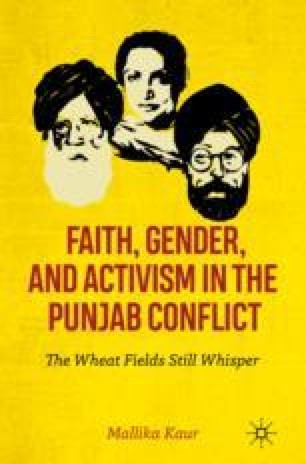 This chapter traverses the watershed events of 1984 that presented Kaur, Jaijee, and Bains the choice to recognize their privilege and no longer accept that which they couldn’t immediately change.

While most accounts of Punjab’s conflict begin with 1984, this book closes with that year. To relay the events that jolted the Sikh sense of self, the three main protagonists are joined by various voices as the two timelines running through the earlier chapters converge in the cauldron of this terrible year.

Though June 1984’s fierce firefight between the militants and the Indian Army was in Amritsar, 1984 was indelibly experienced across Punjab. Sikhs, particularly in traumatized rural Punjab, were overcome with sentiments of betrayal and alienation.

The chapter then travels outside Punjab, from where Punjab’s history is most often written: in November 1984, Indira Gandhi was shot dead, reportedly by her Sikh bodyguards. Anti-Sikh pogroms, radiating out from the capital city of New Delhi, claimed thousands of lives. The political currency of the November 1984 carnage then won Gandhi’s son and the Congress Party a landslide election victory, unmatched since.

The immediate effect on the Sikh psyche was unmistakable: the year 1984 was an end and a beginning.

Life can only be understood backwards;

but it must be lived forwards.

Cite this chapter as:
Kaur M. (2019) Ten Thousand Pairs of Shoes. In: Faith, Gender, and Activism in the Punjab Conflict. Palgrave Macmillan, Cham