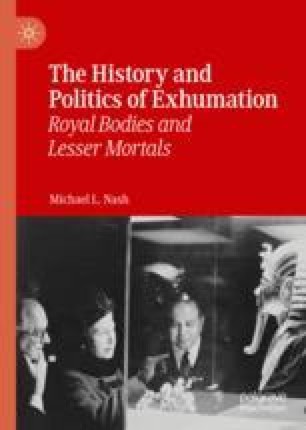 Reasons Many and Various

In this final “Catch-All” chapter, Nash covers many cases which do not fall into the previous categories, although some fall into two.

This multiplicity of reasons include medical research (Sir Mark Sykes); political reasons (Sir Roger Casement, Rudolf Hess, and the proposed exhumation of General Franco); the result of pressure groups (Edith Thompson); removal to escape obliteration of the past (Eva Peron); applications to the court for establishment of relationship by DNA samples (Salvador Dali); new grave robbing or the trade in human organs (Miguel Angel Martinez); to establish guilt or innocence (Eric McKenna).

Political scandals are covered: the exhumations of the Polish President Zacynski and ninety-five others; three Presidents of the United States; the political and historical claims of other states (Matthew Flinders) and many other examples of necro-politics.