Work in the Future 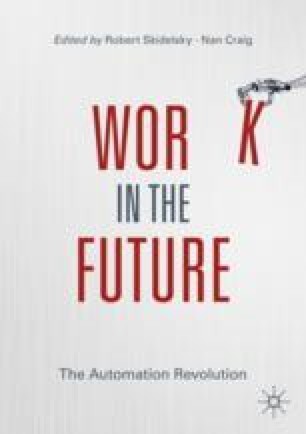 The Future of Work

Is technology making the human race redundant materially and spiritually—both as producers of wealth and meaning? Ever since machinery became an active part of industrial production, redundancy has been seen either as a promise or a threat. Sociologists stress the importance of work in giving meaning to a person’s existence. Economists, on the other hand, see work as purely instrumental, a means for buying things people want. If it can be done by machines, so much the better. David Ricardo described the shift from human labour to mechanical as inevitable and ultimately beneficial, while Marx’s later analysis denied that there were sufficient compensations to labour for their redundancy. The optimistic view of redundancy relies on the idea that machines will complement human capacity, work is only relevant as a means to consumption and consumption can be unlimited. These assumptions are wrong. The idea that a supply shock like automation will automatically set in motion acceptable compensatory demand or complementary supply responses is delusive. Any responses are likely to be highly disruptive, even destructive. Given this, policy must pay much more attention to correlating the rate of change with the capacity of human society to absorb it.

Cite this chapter as:
Skidelsky R. (2020) The Future of Work. In: Skidelsky R., Craig N. (eds) Work in the Future. Palgrave Macmillan, Cham