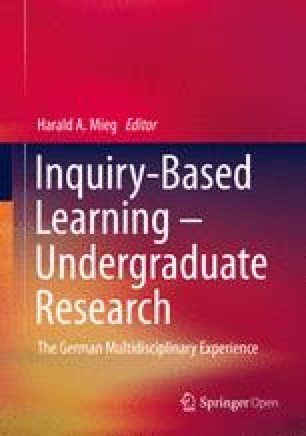 Prospects for the Economy and Society? The Issue of Employability and the Implementation of Inquiry-Based Learning

In this article, we intend to examine the contribution that inquiry-based learning makes to the economy and society based on the report by Schubarth and Speck (2013). We will examine (a) stakeholder interests in the economy, higher education and society, (b) the importance of inquiry-based learning in higher education policy and (c) the implementation of appropriate research and practical offers in institutions of higher learning.

In this article, we intend to examine the contribution that inquiry-based learning makes to the economy and society based on the report by Schubarth and Speck (2013). We will examine (a) stakeholder interests in the economy, higher education and society, (b) the importance of inquiry-based learning in higher education policy and (c) the implementation of appropriate research and practical offers in institutions of higher learning.

Over the course of the Bologna Process, the term “employability” has become increasingly central to the harmonization of European university education and the common university framework. An important milestone for the further development of the higher education system was the 1999 Bologna Declaration, which called for the introduction of comparable qualifications in Europe, and which justified the need for the employability of European citizens and the international competitiveness of the European higher education system (Bologna-Declaration 1999, p. 3). The German version of the Bologna-declaration (Bologna-Erklärung 1999) refers to “promoting the mobility and labor-market qualification of its citizens” and emphasizes the need for comparable degrees in order to “qualify the labor market relevant qualifications of European citizens as well as the international competitiveness of the European higher education system to promote it” (Bologna-Erklärung 1999, p. 2 et seq., translated).

In its 1999 decision on the “Akkreditierung von Studiengängen mit den Abschlüssen Bachelor und Master” (“Accreditation of degree programs with the bachelor’s and master’s degrees”), the German Accreditation Council, which is responsible for quality assurance in the course of studies and in teaching in Germany by means of an accreditation of degree programs, formulated numerous minimum standards for the accreditation of degree programs (Akkreditierungsrat 1999). The requirements were a practical application or practical relevance of the course of study, as well as the employability or professional qualification of the university graduates. Accreditation procedures should “help to increase student mobility and improve international recognition of degrees” (ibid., p. 1). The accreditation agencies should take into consideration the “educational function of the degree program, and the likelihood that the degree can be completed within the projected number of terms, in particular in terms of the employability of the graduates and foreseeable developments in possible professional fields” (ibid., p. 2, translated).

The German Rector’s Conference (Hochschulrektorenkonferenz, HRK) has dealt with the relationship between academic education and the labor market in many statements. It calls, inter alia, for (a) the further development of study contents with a view to better employability and a stronger integration of interdisciplinary and profession-related competencies in the study (HRK 2005), (b) institutions of higher learning to embrace socializing, action-oriented and character-forming functions, and to promote professional qualification among graduates by imparting key competencies and integrating vocational-field-oriented internships (HRK 2008); and (c) sensitivity on the part of institutions of higher learning for labor market/practice requirements and non-academic or interdisciplinary key qualifications, as well as an implementation of the labor marketability/employability expected by the study reform (HRK 2009).

The Federal Society of the German Employer Associations (BDA) has been involved in university policy for many years and criticizes the lack of practical training. The BDA advocates stronger practice orientation in degree programs (e.g. through internships, project-based and problem-based learning) and labor market-related degree programs (BDA 2014, p. 1). In the interest of employability, in a joint memorandum, the BDA, the HRK and the Federation of German Industry (BDI) have called on the institutions of higher learning to: (a) prepare students for a professional occupation in addition to social participation; (b) to apply technical content and methods in the degree programs, (c) to relate the study contents to fields of practice and, at the same time, to impart interdisciplinary and key competencies, (d) to support the development of scientific and labor market-relevant competencies during the course of studies and (e) to impart professional, methodological, social and personal competencies within the degree programs (BDA/HRK/BDI 2008, p. 6 et seq.).

The German Chamber of Commerce and Industry (DIHK) has already interviewed several companies about university graduates. The current survey reveals that, above all, companies expect graduates to exhibit a capacity for teamwork (B.A.: 72%; M.A.: 57%), the ability to work independently/self-manage (B.A.: 68%; M.A.: 66%) as well as an ability to analyze and make decisions (B.A.: 67%; M.A.: 68%) (DIHK 2015, pp. 10 and 17). The companies express the expectation (among others) that study material will be more application-oriented and that internships will be more integrated within degree programs (DIHK 2015, pp. 9 and 15). In a 2012 statement, the Chief Human Resource Officers at Leading German Companies also criticized the lack of practice orientation and practical relevance in university study. They advocated for greater practical relevance, longer practice phases of at least 3 months, and the integration of internships into curricula (Personalvorstände führender deutscher Unternehmen, 2012). At the same time, they emphasize the importance of interdisciplinary competencies: “Companies primarily hire well-educated individuals and not formal degrees” (ibid., p. 3, translated).

37.2 The Significance of Inquiry-Based Learning in Higher Education Policy

Parallel to the Bologna Process, inquiry-based learning has gained increased significance at institutions of higher learning, in publications and at conferences (Reiber 2007; Journal Hochschuldidaktik 2009; Ramm et al. 2014). Crucial for this are likely the demands for a professional qualification (B.A.) or a research-oriented degree (M.A.), the increasing research orientation and a third-party orientation in the institutions of higher learning, the limits of traditional teaching in the face of changing learning styles and the lack of compulsory attendance of students, as well as promoting relevant projects through the Teaching Quality Pact.

Compared to employability, inquiry-based learning has thus far only been afforded marginal importance in statements on university policy from the political arena, scientific organizations and employers. In addition to the handouts and conferences of the HRK, the German Science Council (Wissenschaftsrat) in particular has positioned itself repeatedly and in an interdisciplinary manner as being for inquiry-based learning in recent years:

37.3 Implementation of Employability and Inquiry-Based Learning

Finally, the question arises as to what the promotion of employability and the implementation of inquiry-based learning in Germany actually looks like. Due to the focus on other questions, the student survey provides no clear answers; however, it does provide empirical evidence. For example, in the survey, students were asked about practice-relevant and research-related courses offered within their degree programs (Ramm et al. 2014, p. 262 et seq., last updated: 2012/2013 winter semester):

Courses with a Practical Orientation

It has been shown that the employability of graduates, and a practical and labor-market-relevant education oriented towards such employability, are given a high priority in many statements from higher education policy, scientific organizations and employers. It is also undisputed that, in addition to a practical and labor-market-relevant education in the interests of the economy, institutions of higher learning must also provide a basic academic, technical university education and interdisciplinary personal development (citizenship). Thus, a comprehensive university assignment aims at teaching or acquiring (1) an academic, technical university education, (2) a practical and labor market relevant (education) and (3) interdisciplinary personal development.

In principle, inquiry-based learning offers the opportunity to contribute to this comprehensive university mission. So far, however, inquiry-based learning is more of a marginal topic in higher education policy. The German Science Council, which, in addition to the German Rector’s Conference, has dealt more intensively with the topic, considers inquiry-based learning to be a particularly suitable teaching and learning format for fostering labor market-relevant competencies and “education through scholarship” (Bildung durch Wissenschaft, e.g. independent development of questions, systematic engagement with problems, obtaining knowledge in a methodological manner, critically reflecting on fundamental questions), since students are actively involved here and an exemplary scientific cognitive process is reproduced. In summary, inquiry-based learning can (still) be established as a problem of meaning in university politics, a problem of theory, a problem of legitimacy and a problem of implementation in Germany (Box 37.1).

The question is whether those proficiencies, which are promoted through inquiry-based learning in a course of study, are already noticeable in corporate practice. Below are excerpts from four interviews.

Moritz Gekeler worked as a futurologist at Daimler AG, as a lecturer and program manager at the HPI School of Design Thinking and as a design strategist at the SAP Design and Co-Innovation Center. At present, he heads the consulting firm DOLABORATE GmbH.

Angela Haas is a human-centered design expert at Swisscom AG and works on the interface between design and management. She is interested in design thinking in business management, among other things.

Ruth Lassalle is a senior consultant at HRpepper Management Consultants and teaches at Basel University. As a psychologist, she has many years of experience in change and development projects as well as in the field of personnel diagnostics and development.

Andrea Schröter has been the head of HR at Leifheit AG (Nassau/Lahn) since the end of 2012. As a lawyer, she has previously worked for the BASF Group and most recently as director of Global Human Resources at Tridonic GmbH & Co KG (Dornbirn/Austria).

What kind of people do you tend to hire?

Open Access This chapter is licensed under the terms of the Creative Commons Attribution-NonCommercial-NoDerivatives 4.0 International License (http://creativecommons.org/licenses/by-nc-nd/4.0/), which permits any noncommercial use, sharing, distribution and reproduction in any medium or format, as long as you give appropriate credit to the original author(s) and the source, provide a link to the Creative Commons licence and indicate if you modified the licensed material. You do not have permission under this license to share adapted material derived from this chapter or parts of it.

The images or other third party material in this chapter are included in the chapter’s Creative Commons licence, unless indicated otherwise in a credit line to the material. If material is not included in the chapter’s Creative Commons licence and your intended use is not permitted by statutory regulation or exceeds the permitted use, you will need to obtain permission directly from the copyright holder.