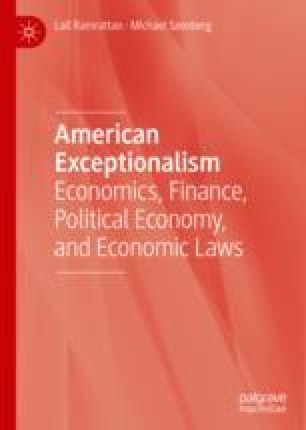 The publication of Alexis de Tocqueville’s Democracy in America kindled interest in many nations and disciplines to appraise the exceptional nature of their activities. None of the prior published works, however, have focused their analysis from the economic point of view. Some of the available books include Max Lerner (1987), Seymour Martin Lipset (1996), Deborah Madsen (1998), Newt Gingrich (2011), Oliver Stone and Peter Kuznich (2013), and Dick Cheney and Liz Cheney (2015).

Perhaps a major reason economics has been neglected from this discussion in the past is because economics was long considered a “dismal science” following Thomas Carlyle’s characterization of the Malthus demographic model. Over time, however, thinking has evolved and increasingly for more practitioners, economics has become the “queen of the social sciences.” This book fills a gap in the literature concerning American Exceptionalism by furthering the debates and highlighting the pros and cons of American Exceptionalism, from the economic, financial, political economic, and legal economic perspectives.

For the disciplines selected, the study is hierarchical in the sense that top names of people in the field and scientific topics of the disciplines are only touched on. For instance, landmark empirical achievements in the areas of Cobb-Douglas production function, the rational expectation and efficient market hypotheses, and computational general equilibrium analysis were not directly engaged. Similarly, big names such as Frank Tausig’s applied trade theory and Gary Becker’s socio-economic analysis are untouched. Also, we avoided empirical application relating to economic crises such as the Great Depression (1930), Great Recession (2008), the Pesos, Asian, and other crises. These works are important in that they are underscored by human blunder and scientific revolution, but they are often unsettled in regard to their causes.

A purview of what we have discussed is given here, chapter by chapter. Chapter  2 considers both qualitative and quantitative theories. Budding theories that became the high theories of economics and finance are investigated in Chaps.  3 and  4. When President John Adams was confronted with the French Comptroller-General of Finances M. Turgot’s criticisms of the American government, President Adams resorted to a historic survey of types of government, from ancient Greece to the Middle Ages. Similarly, we have included a final discussion in Chap.  5 to present the argument for American Exceptionalism in the domain of political economy and economic law over the ages.