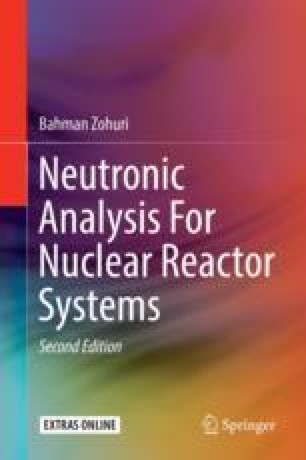 The point kinetics model can be obtained directly from the space- and time-dependent transport equations. However, these equations are too complicated to be of any practical application. The diffusion approximation, obtained by keeping only the PI terms of the spherical harmonic expansion in the angular variable of the directional flux, is frequently used in neutronic analysis. This chapter discusses reactor characteristics that change because of changing reactivity. A basic approach using a minimum of mathematics has been followed. Emphasis has been placed on distinguishing between prompt and delayed neutrons and showing relationships among reactor variables, keff, period, neutron density, and power level.

Consider a thermal reactor example. The following results were obtained for a six-group model of the Advanced Reactivity Measurement Facility reactor: a small 93% enriched aluminum, slab core reactor. The model is based on a bare core version of this reactor shaped into a cube with a 51.09 cm side dimension. This gave a buckling of B2 = 0.011344/cm2. Note that this is a fairly small reactor.

The reactivity in a steady-state reactor, in which the neutron generation time is 10−3 s, is suddenly made 0.0022 positive; assuming one group of delayed neutrons, determine the subsequent change of neutron flux with time. Compare the stable period with that which would result had no delayed neutrons. Use the following equation for variation of the neutron density with time:

In addition, for the stable reactor period, assuming one (average) group of delayed neutron is given by:

The prompt neutron lifetime in a reactor moderated by heavy water is 5.7 × 10−4 s. For a reactivity of 0.00065, express the reactor period (a) in second, (b) in hours (Ih), using the relationship between reactor period Tp, and in hours (Ih) as Tp ≈ 3600/Ih. What is the reactivity in dollar units? Assume for very long periods and very small reactivity the following equation applies and (β/λ) = 0.084:

In addition, the unit that is called “the dollar,” is defined by:

As part of one-group point kinetics equation, if we assume a case for when only one group of delayed neutron is assumed, the results of solution provide a polynomial in the denominator as part of general solution, when we assume source term is constant and equal to S0 with two roots of s1 and s2 of the following mathematical notation:

Then the neutron flux can be obtained as:

Assuming one group of delayed neutrons, determine the subsequent change of neutron flux with time. Additionally, the reactivity is taking place in a steady-state thermal reactor with no external neutron source, in which the neutron generation time Λ = 10−3 s is suddenly made 0.0022 positive and the following data applies: λ = 0.08 s−1 and β = 6.5 × 10−3.