The Manufacturing Sector in Argentina, Brazil, and Mexico 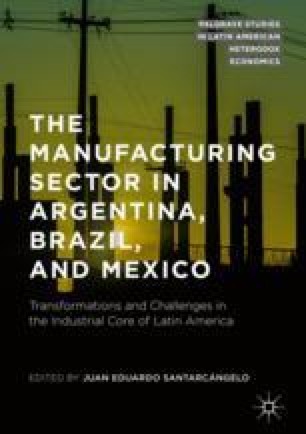 The Manufacturing Sector in Argentina, Brazil, and Mexico pp 1-5 | Cite as

After the hegemony of neoliberalism and the application of the Washington Consensus recommendations, actively supported by the International Monetary Fund and the World Bank during the 1980s, 1990s and early 2000s, Latin America experienced strong political changes that led to a period of sustained growth (annual growth rates above 4% from 2003 to 2013). In that context, one of the most significant characteristics was the outstanding performance of the manufacturing sector. However, it should be noted that industrial development in Latin American countries differs significantly among countries, and it is highly concentrated on the performance of the three most important economies of the region, Argentina, Brazil and Mexico, which on average from 1960 to the present have generated 75% of the manufacturing value added. The aim of the book is to analyze the recent performance of the manufacturing sector in Argentina, Brazil and Mexico, the industrial core of Latin America, in order to account for the transformations, challenges and true possibilities of achieving economic development based on industrialization. In order to do this, we analyze the historical evolution of the industrial sector of Argentina, Brazil and Mexico since the import substitution industrialization stage, the economic impacts of the process of deindustrialization in the last quarter of the twentieth century during the rise of neoliberal policies, and the main transformations registered during the first decades of the twenty-first century when a reindustrialization process was registered. Also, the book studies the existence (or lack) of structural change in the economy, its level of technological development, economic concentration and evolution of income distribution, and the degree of external dependence and international integration of the different industrial sectors of the countries. Although there are individual works that analyze the specific trajectories of the industrial sector in the countries analyzed, there is an enormous vacancy in studies that simultaneously: (1) link together the impacts of the processes of internationalization of the productive process, financialization of the economy, and pressures imposed by trade agreements on the ability to implement industrial economic policy; (2) analyze in depth and in a comparative perspective the successive transformations suffered by the manufacturing sectors of Argentina, Brazil, and Mexico; and (3) examine these phenomena from heterodox theoretical perspectives, which allows not only to look at the main axis of analysis but also to emphasize elements that are not considered in the mainstream approaches.