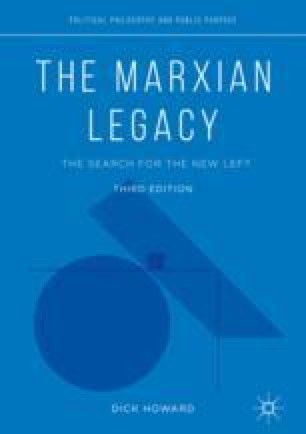 The goals Max Horkheimer had set out for the Institute for Social Research were passed on to Jürgen Habermas in the 1960s when he was named professor of philosophy and sociology at the University of Frankfurt. Faithful to the attitude of Critical Theory, Habermas’ evolving work has been driven between two seemingly opposed, but in fact mutually dependent, poles: the concrétisation of Critical Theory as a research program and the political concerns bound up with the Marxian heritage of Critical Theory. By actively inheriting the tension between these two poles, Habermas has been able to rethink many of the questions that blocked the development of Marxism. He has also been attacked politically by others who also claim to be heirs of Marx. This is not the place to adjudicate that case. At the end of the 1970s, Habermas was still in his 40s; his philosophical thought began to develop the idea of a ‘communicative reason’ that could overcome reified rationality. While waiting for the promised new study, a reflection on the path traveled by Critical Theory under his leadership offers a useful pause.