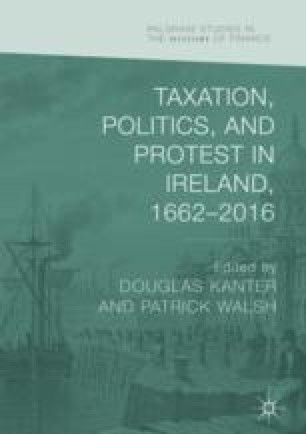 That ‘Absurd Phantom Called Free Trade’: The Politics of Protection in Ireland, c. 1829–52

This chapter examines the evolution of protectionist ideas in Irish Conservative political circles between 1829 and 1852. In particular, it explores the attempts made by some Conservatives to, as Isaac Butt put it, use protectionism as a lever by which to reclaim ‘from the priests and agitators the popular mind of this country’. It also traces the tensions which emerged between the landed advocates of protectionism, who generally saw it as a necessary instrument to preserve the agricultural interest, and those Protestant populists, active in the late 1820s and early 1830s, who supported it as a means of creating employment opportunities for the Irish Protestant working class.

From a speech by Colonel Chatterton, the Conservative MP for Cork, at a dinner held in his honour at the Imperial Hotel in Cork City; Cork Examiner, 23 Nov. 1849.

Cite this chapter as:
Shields A. (2019) That ‘Absurd Phantom Called Free Trade’: The Politics of Protection in Ireland, c. 1829–52. In: Kanter D., Walsh P. (eds) Taxation, Politics, and Protest in Ireland, 1662–2016. Palgrave Studies in the History of Finance. Palgrave Macmillan, Cham