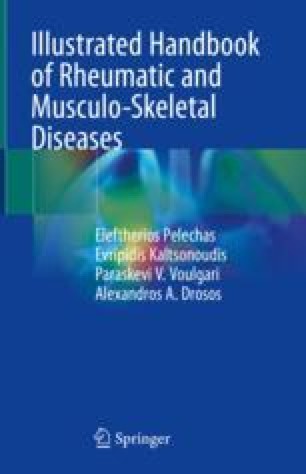 Crystal arthropathies are a group of joint disorders due to deposition of crystals in and around joints which lead to joint destruction and soft tissue disturbances (swelling, redness, masses etc.). Clinical presentations of the different types of crystal arthropathies are often characteristic enough to differentiate them from each other, but mistakes can be made, leading to delayed or incorrect management. Gout is the most common form of crystal arthropathies. First identified by the Egyptians in 2640 BC and later by Hippocrates in the 5th century BC, who referred to as “the unwalkable disease”. Throughout history, gout has been associated with rich foods and excessive alcohol consumption and has been referred to as the “disease of kings”. Calcium pyrophosphate dihydrate disease (CPPD/pseudogout) and basic calcium phosphate (BCP/hydroxyapatite) are the two other forms of crystal arthropathies.

Crystal arthropathies are a group of joint disorders due to deposition of crystals in and around joints which lead to joint destruction and soft tissue disturbances (swelling, redness, masses etc.). Clinical presentations of the different types of crystal arthropathies are often characteristic enough to differentiate them from each other, but mistakes can be made, leading to delayed or incorrect management. Gout is the most common form of crystal arthropathies. First identified by the Egyptians in 2640 BC and later by Hippocrates in the 5th century BC, who referred to as “the unwalkable disease”. Throughout history, gout has been associated with rich foods and excessive alcohol consumption and has been referred to as the “disease of kings”. Calcium pyrophosphate dihydrate disease (CPPD/pseudogout) and basic calcium phosphate (BCP/hydroxyapatite) are the two other forms of crystal arthropathies.

Gout is the most common form of inflammatory arthritis. The reported prevalence of gout worldwide ranges from 0.1% to approximately 10%, and the incidence from 0.3 to 6 cases per 1000 person-years. Both prevalence and incidence is highly variable across various regions of the world. Developed countries show a higher prevalence than developing countries. Major risk factors for gout include hyperuricaemia, genetics, dietary factors, medications, comorbidities and exposure to lead.

Gout is the result of the pathogenic effect of monosodium urate (MSU) crystals in the joints and soft tissue. Uric acid comes from the metabolism of purine nucleotides. Purine metabolism leads to inosine then hypoxanthine. Hypoxanthine is metabolised to xanthine, which is metabolised to uric acid. The enzyme xanthine oxidase catalyzes the last two steps and is the major site for pharmacologic intervention by allopurinol. If the body is unable to metabolise urate, hyperuricaemia develops. As urate levels increase, crystals develop and precipitate into the joint leading to arthritis. Urate crystals activate monocytes and macrophages which try to clear the crystals by phagocytosis. This leads to the release of proinflammatory cytokines and chemokines triggering a cascade of acute inflammatory reaction. An additional proposed mechanism involves the role of an inflammasome and interleukin (IL)-1 in the pathogenesis of inflammation induced by MSU and CPPD. Pathogenesis of BCP is complex. It can be secondary to intracellular calcium increase, leading to the activation of calcium-dependent pathways.

Gout is clinically manifested as acute inflammation of the involved joint or soft tissue. In general, gout includes joint swelling in both the lower and upper extremities with a predilection to the first metatarsophalangeal (MTP) joint (podagra). Any peripheral joint can be involved (feet, ankles, knees, hands, wrists, elbows). Acute gout can also occur in the bursae, such as the olecranon or prepatellar bursae, where it causes bursitis. Tendons, such as the Achilles tendon can also be involved. Systemic manifestations such as fever and malaise may develop. The arthritis in acute gout usually manifests as asymmetric monoarticular or oligoarticular inflammation. Without treatment it may last for 3–10 days, and resolves spontaneously, but when the attacks occur more frequently, they tend to last longer and do not resolve completely leading to chronic gouty arthropathy. Chronic arthropathy eventually leads to erosions and joint destruction.

CPPD encompasses a variety of clinical manifestations. It may be asymptomatic, but it may mimic gout (pseudogout), rheumatoid arthritis (RA) (pseudo-rheumatoid arthritis), and OA (pseudo-OA). The knee is the most commonly affected joint, followed by the wrist. Acute podagra involving the 1st MTP joint is rare. In contrast to the brief attacks of acute gouty arthritis that last only some days, acute attacks of CPPD disease may last for weeks to months. It is important to remember that CPPD disease can be a presenting sign of hyperparathyroidism, hypophosphatasaemia or other metabolic disorders. Thus, an appropriate screening is indicated, especially in patients younger than 60 years of age who present with CPPD symptoms. Similar to gout, CPPD disease can manifest with systemic features such as fever and malaise, especially in the elderly. The acute attacks can involve one or multiple joints.

BCP crystals are mainly responsible for acute periarthritis that involves all possible tendon or capsular sites. The most affected site is the shoulder. The formed calcifications can be unfragmented and dense, with a round shape, at the asymptomatic phase. When they start to be fragmented the inflammation starts provoking pain and even limited range of motion (ROM) of the affected joint.

Synovial fluid analysis is considered the technical standard for evaluating patients with gout or acute CPPD arthritis not only as a diagnostic procedure but also to rule out septic arthritis. The collected fluid needs to be processed by Gram stain, culture, and microscopic examination. The white blood cell count is useful to estimate the degree of inflammation. Under polarized light, MSU crystals are strongly negative birefringent and have a needle-shape, whereas CPPD crystals are weakly birefringent and have a rhomboid shape. BCP crystals are not detectable by light polarized microscopy. Alizarin red staining can provide information on BCP crystals.

Laboratory tests such as serum urate levels, acute phase reactants, serum creatinine, full blood count (FBC) and liver function tests (LFTs) are useful for evaluating other comorbid diseases or to monitor and adjust the dose of urate-lowering therapy. Of note, serum urate levels are not helpful indicators during acute gouty attacks because they can fluctuate from low to high. Measuring a 24 h collection of urine urate is a very useful test to identify patients who overproduce urate. BCP disease may present with no laboratory abnormalities.

a high-end musculoskeletal ultrasound (MSUS) equipment can detect crystal depositions before they can be seen on plain x-rays. MSUS is a not invasive, safe, easily accessible and a well-accepted imaging technique by the patient. In gout, MSUS can be useful for the diagnosis and management from the initial manifestations of the disease in comparison with other imaging modalities. Specific signs in gout are the double contour sign, aggregates and tophi. The double contour sign is defined as an abnormal hyperechoic band over the superficial margin of the hyaline cartilage (HC). As non-specific findings, inflammatory abnormalities (joint effusion and synovial hypertrophy) and structural lesions (such as bone erosions) can be detected.

Gout – radiographic findings: Urate crystal deposits in tissues with poor blood supply such as cartilage, tendon, sheaths, bursae etc. Acute attacks occur at the night when the blood supply of the body is decreased and the body temperature is low. Both these factors facilitate urate crystal precipitation. Only 45% of patients with gout manifest radiographic bone changes and then only 6–8 years after the first attack. The radiographic changes indicate the chronicity of the disease process.

Gouty arthritis has several characteristic radiographic features. Erosions, which are usually sharply marginated, are initially periarticular in location and are later seen to extent into the joint. An overhanging edge of erosion is a frequent identifying feature. Usually, there is a striking lack of osteoporosis, a feature helpful in differentiating this condition from RA. The reason of this is that acute gouty attack is short in duration to allow the development of the periarticular osteoporosis so often seen in RA patients. Other radiographic features of chronicity in gout attack is punched-out erosions with sclerotic borders. Chronic tophaceous arthritis is created by the deposition of urate crystals in soft tissues. Tophi are dense tissue masses usually found in the periarticular area along the extensor surface of the bone. Urate crystals are not radio-opaque. However, calcium may precipitate with the urate crystals to varying degrees, creating variation in the density of tophi.

CPPD has characteristic findings on plain x-rays. Conventional radiographs provide important evidence for the diagnosis of CPPD disease and may assist to differentiate CPPD from other types of arthritis. Although chondrocalcinosis is the radiographic finding that is most closely aligned with CPPD disease, other radiographic findings may assist to differentiate primary OA from CPPD. These include: hook-like osteophytes involving the metacarpophalangeal (MCP) joints, annulus fibrosus calcification, disc degeneration with vacuum phaenomenon and subchondral erosions, and vacuum phaenomenon of the sacroiliac joints as far as it concerns the axial skeleton. Other radiographic features include radio-carpal or patello-femoral narrowing of the joint space with cysts formation and subchondral collapse. Chondrocalcinosis is seen in the knees, the wrists, and other joints such as intervertebral discs and symphysis pubis.

Hydroxyapatite deposition disease: the radiographic findings are the following: Periarticular calcification (a. early deposition in linear and poorly defined, often blending with the soft tissue, b. with time the calcifications become denser, homogeneous, well-delineated and circular).

The main concern in the acute attacks of crystal arthropathies is to reduce inflammation and pain, and also to prevent future joint erosions and flares. Treatment depends on the clinical presentation and findings. Non-steroidal anti-inflammatory drugs (NSAIDs), colchicine, corticosteroids (CS), interleukin (IL)-1 inhibitors and urate-lowering drugs can be used depending on the clinical presentation.