The Queer Cultures of 1930s Prose 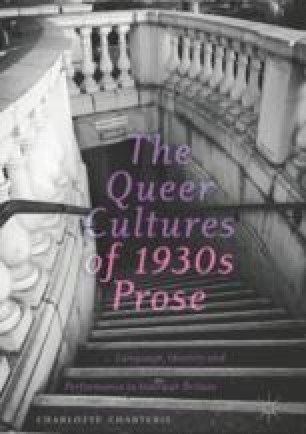 Part III situates Patrick Hamilton at the heart of a sub-cultural group connected primarily by locale, examining his work in dialogue with that of fellow Fitzrovians Julian Maclaren-Ross and George Orwell in an attempt to rescue Hamilton from the hermetically-sealed existence to which a continued biographical impulse has seen him doomed, a victim of what Terry Eagleton terms the cult of the Individual Life. It again traces the author’s use of seven key terms—retaining queer, game, dream, escape and racket from the earlier selections, but also considering common and straight—as part of a distinct discourse of urban low-life, performative of a queer identity shaped by its resistance to and subversion of the ‘language of power’ that underpins and normatizes capitalist systems.

Cite this chapter as:
Charteris C. (2019) Part III: Patrick Hamilton and the Fitzrovians. In: The Queer Cultures of 1930s Prose. Palgrave Macmillan, Cham