On Significant Applications of Geophysical Methods 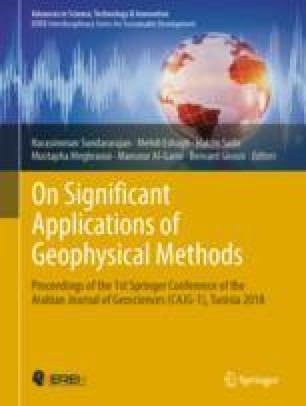 CAJG 2018: On Significant Applications of Geophysical Methods pp 65-68 | Cite as

During a geotechnical survey recognition phase of a project in Raoued region, gas release has been observed. This shallow gas presence, even in small amount, represents a serious obstacle during the project execution. An exhaustive study has been conducted to better understand the phenomenon and insure the security of works: (i) Geotechnical campaign (18-cored holes) completed by a detailed measure of gas nature and properties and (ii) Geophysical electromagnetic prospection using NANOTEM. On this paper, we focused on the geophysical survey process and methodology. A high-density geophysical prospection was performed: 588 measure stations were distributed in 17 lines, leading to an investigation depth between 50 and 60 m. This prospection allowed us to elaborate the average resistivity map. In order to increase the model credibility, an adjustment was done using cores data. The model shows gas-filled layers mainly in the southeast and smaller anomalies scattered on the rest of the site. This information was the key to success of the degassing operation.