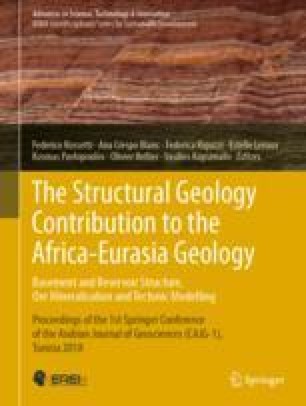 Distribution of GPS-vectors denotes that the Earth’s crust is twisted from North Pole and South Pole spirally around two hinges: Aleutian and Scotia. This torsion field originates from the Mecca-spiral with two arms: Dahw (rolling) and Tahw (spreading). D and T are two main components of geodynamics. In this paper, I constrain the general vorticity of the Earth’s crust within a sigmoid called global sigmoid (GS). Head and tail of GS is approximated by two wings: A and B, which are rolled toward the central bar (Mecca). A-wing bounds divergent velocity vectors (source) and B-wing bounds convergent velocity vectors (sink). The highest divergent velocity starts from Nazca (inflection line of GS) and ends (converges) toward the Mariana Trench. The minor divergent along the Mid Atlantic Ridge occurred in the excess part (0.618–0.382). The torsion field partitionizes into two orthogonal belts: in the east hemisphere, it is tuned along the E/W-direction, and in the west hemisphere, it is tuned along the N/S-direction. Orthogonal tuning applies inverse polarization in the GPS-vectors as well as geomorphology, gravitational anomaly and magnetic anomaly. Creation of a mountainous spot (Himalaya) in opposite direction of abysmal spot (Bermuda) is a typical sample of morph-polarization. The Bermuda is located between two mountainous spots (Rocky and Ands) but the Himalaya is between two abysmal spots (Gulf of Indus and Gulf of Bengal).