Further Advances in Pragmatics and Philosophy: Part 2 Theories and Applications 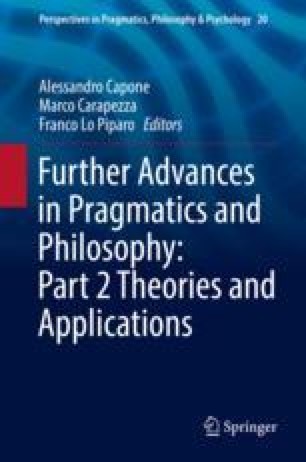 Further Advances in Pragmatics and Philosophy: Part 2 Theories and Applications pp 561-576 | Cite as

“I Hope You Will Let Flynn Go”: Trump, Comey, Pragmemes and Socio-pragmatics (A Strawsonian Analysis)

In this paper, we discuss an utterance/pragmeme/pract by Donald Trump addressed to FBI Director Comey: ‘I hope you will let Flynn go’ (The complete original utterance as reconstructed by Comey is ‘I hope you can see your way clear to letting this go, to letting Flynn go.” (Camp E, The hot potato of interpretative responsibility. http://languagelog.ldc.upenn.edu/nll/?p=33246, 2017)). We consider the explicature of this utterance (I hope you will drop the Russian investigation concerning Flynn) and its illocutionary and perlocutionary effects. We argue that while Republicans opt for an Austinian or Searlian analysis, in the attempt to deny that this utterance constitutes an attempt to influence Comey, there are reasons for adopting a Strawsonian analysis, casting it in the framework of pragmemes, worked out by (Mey JL, Pragmatics. Oxford, Wiley, 2001) to cast a socio-pragmatic analysis of utterance interpretation in context. According to this analysis, Trump illicitly tried to persuade Comey to drop the Russian investigation, interfering with the judiciary power. A case can be made for obstruction of justice.

The performance of any speech act involves at least the observance or exploitation of some linguistic conventions (Strawson 1964, 442).

It seems clear, that is, that there are many cases in which the illocutionary force of an utterance, though not exhausted by its meaning, is not owed to any conventions other than those which help to give it its meaning (Strawson 1964, 443–4).

Many thanks to Fabrizio Macagno, Theresa Catalano, Wayne Davis, and Richard Warner, for their interesting comments on my paper.

Cite this chapter as:
Capone A., Bucca A. (2019) “I Hope You Will Let Flynn Go”: Trump, Comey, Pragmemes and Socio-pragmatics (A Strawsonian Analysis). In: Capone A., Carapezza M., Lo Piparo F. (eds) Further Advances in Pragmatics and Philosophy: Part 2 Theories and Applications. Perspectives in Pragmatics, Philosophy & Psychology, vol 20. Springer, Cham