Principles and Practice of Anesthesia for Thoracic Surgery 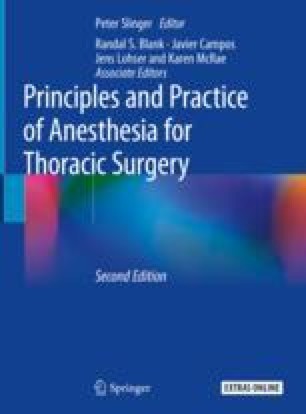 Thoracic surgery can cause significant pain and suffering. Appropriate analgesia is important both for humanitarian reasons and to allow early mobilization and pulmonary rehabilitation. Poor pain relief can increase pulmonary complications and mortality. Pain after thoracic surgery is generated from multiple structures and is transmitted via a number of afferent pathways. Factors that affect pain postoperatively can be divided into patient factors, analgesic technique, and surgical approach. Paravertebral catheters and thoracic epidural analgesia are widely used for thoracotomies and both have advantages and disadvantages. Recent studies suggest a similar quality of pain relief between the two approaches but a preferable side effect profile where paravertebral analgesia is utilized. Opioid-tolerant patients pose a particular challenge. Maintenance opioid should be continued perioperatively to avoid withdrawal symptoms. A multimodal technique involving regional blocks and supplemented with non-opioid analgesics is advised.

Association of Anaesthetists of Great Britain and Ireland

Surgical placement of a paravertebral catheter during VATS. The same technique can also be used during open thoracotomy (Video courtesy of Dr. G. Kanellakos) (MP4 78828 kb)

A 64-year-old man has been admitted following a 2-week history of productive cough, lethargy, and collapse. He was initially treated for a community-acquired pneumonia with intravenous antibiotics, but serial chest x-rays and a CT scan have shown a cavitating lesion in the right upper lobe and a loculated pleural collection, likely to represent an empyema. Attempts have been made to drain the collection percutaneously but they have been unsuccessful, and he is scheduled to undergo open drainage of the empyema with decortication. Past medical history includes chronic obstructive pulmonary disease. He is a current heavy smoker and has been for more than 40 years.

Clinical examination reveals a slim man with a respiratory rate of 22 breaths per minute, heart rate 110 beats per minute, blood pressure 120/64, and a temperature 101 °F.

What regional analgesic techniques could be employed here?

Describe the analgesic agents that could be utilized.

A multimodal analgesic approach should be considered for this patient in the absence of contraindications: