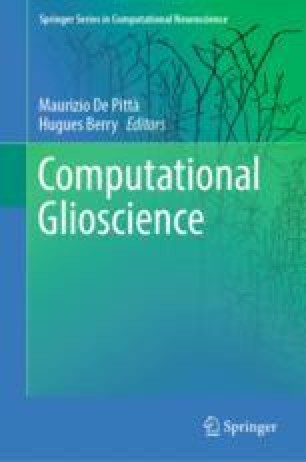 Emergence of Regular and Complex Calcium Oscillations by Inositol 1,4,5-Trisphosphate Signaling in Astrocytes

We use tools of bifurcation theory to characterize dynamics of astrocytic IP\(_3\) and Ca\(^{2+}\) for different IP\(_3\) regimes. We do so starting from a compact, well-stirred astrocyte model to first identify characteristic IP\(_3\) pathways whereby Ca\(^{2+}\) and IP\(_3\) dynamics “bifurcate,” namely their dynamics changes from stable (constant) concentration levels, to oscillating ones. Then, we extend our analysis to the elemental case of two astrocytes, coupled by IP\(_3\) diffusion mediated by gap junction channels, leveraging on the mechanisms of emergence of chaotic oscillations. Finally, we discuss spatiotemporal Ca\(^{2+}\) dynamics in a spatially extended astrocyte model, gaining insights on the possible physical mechanisms whereby random Ca\(^{2+}\) generation could be orchestrated into robust, spatially confined intracellular Ca\(^{2+}\) oscillations.

This work was supported by the Russian Foundation for Basic Research (Grants No. 17-02-01103 and No. 16-32-60145) and by the Council of the President of the Russian Federation for State Support of Young Scientists and Leading Scientific Schools (Grant No. MK-2909.2017.4). MDP is a Junior Leader Postdoctoral Fellow sponsored by “la Caixa” Banking Foundation (LCF/BQ/LI18/11630006), and he was also previously supported by a FP7 Marie Sklodowska-Curie International Outgoing Fellowship by the European Commission (Project 331486 “Neuron-Astro-Nets”). MDP also wishes to acknowledge the support of the Basque Government by the BERC 2018–2021 program, as well as the support by the Spanish Ministry of Science, Innovation and Universities through the BCAM Severo Ochoa accreditation SEV-2017-0718.

Numerical integration of models in Eqs. 6.1–6.10, 6.17–6.19, 6.21–6.23 was pursued by a fourth-order Runge–Kutta integration scheme with adaptive step-size control and maximum step of 5 ms (Press et al. 1992). To construct bifurcation diagrams, we deployed custom code in Fortran and C++ for standard methods of numerical codim-1 and codim-2 continuations (Guckenheimer and Holmes 1986; Kuznetsov 1998). For each value of the bifurcation parameter considered in a continuation up to 150 peak values of Ca\(^{2+}\) and IP\(_3\) oscillations were stored, allowing to reliably detect multistability or chaotic oscillations. Regular vs. chaotic regimes were distinguished by numerical evaluation of Lyapunov eigenvalue spectrum of trajectories on the identified attractor (Shilnikov et al. 2001). Accordingly, the attractor was dubbed chaotic if the Lyapunov spectrum included at least one positive eigenvalue. The complexity of the attractor was instead estimated by numerical evaluation of its power spectrum (Shilnikov et al. 2001).

Stability of equilibria was pursued by numerical computation of the eigenvalue spectrum in the linearized model. Stability of limit cycles was assessed instead by numerical estimation of Floquet multipliers of the corresponding fixed point in Poincaré sections according to classical methods of nonlinear dynamics theory (Guckenheimer and Holmes 1986).

In the study of Ca\(^{2+}\) propagation in astrocyte networks in Fig. 6.5d, an astrocyte compartment was dubbed active if its intracellular Ca\(^{2+}\) increased beyond a threshold value of 0.4 \(\upmu \)M. Accordingly, an event was counted every time one or more connected compartments were simultaneously active in a time window of 0.1 s. Power-law fit of event number (\(\chi \)) vs. size (s) was pursued by linear fit of data points on log–log plots by Origin 8.0 software package (OriginLab Corp., Northampton MA).