A Phenomenology of Musical Absorption 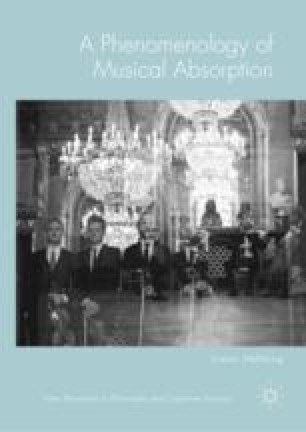 A Phenomenology of Musical Absorption pp 217-246 | Cite as

The Hive Mind: Playing Together

This chapter analyzes the different ways in which the DSQ performs as a group. I criticize trends in the psychology of music that puts too much emphasis on shared predictions, plans, and musical representations and instead present the phenomenology of the various perceptual and agential modes of awareness that enables a robust sense of “we-agency”. Such we-agency for instance allows the DSQ members to be perfectly coordinated even in the absence of explicit awareness of one another. I emphasize the role of the body schema as necessary for “intercorporeity”, which I argue constitutes a fourth source of passivity. In its totality, this chapter is an explication of the phenomenological underpinnings of the musical mind as extended into the instrument, the music and, one’s co-performers.

This chapter relies on and further develops arguments formed in Schiavio and Høffding (2015) and Salice et al. (2017).