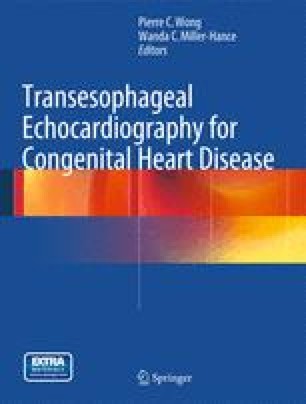 Transesophageal echocardiographic image of the right atrium viewed in the midesophageal bicaval view. The superior vena cava is seen superiorly with a small amount of contrast, and the right pulmonary artery is seen in cross section as it courses behind the SVC. The broad-based right atrial appendage is seen anteriorly (MOV 1409 kb)

Image of the left atrium in the midesophageal two chamber view. The left upper pulmonary vein is seen, and directly anterior to this is the entrance of the narrow based left atrial appendage into the left atrium (MOV 1153 kb)

In this view the TEE imaging probe is advanced to a low esophageal position to display the lower esophageal inferior vena cava long axis view as the probe angle is adjusted to the sagittal (90°) plane. The inferior vena cava (IVC) is demonstrated and a hepatic vein is seen joining the IVC anteriorly and superiorly (MOV 3091 kb)

Equivalent view as depicted in Video 6.4 in a patient with interrupted inferior vena cava with azygous continuation. In this view only the hepatic veins are seen (MOV 1501 kb)

In this view the TEE probe is in the low retrocardiac position, and has been rotated posteriorly in the sagittal plane. Two vascular structures are seen coursing adjacent to each other. Color Doppler demonstrates pulsatile flow directed caudally (the descending aorta) anteriorly and a second posterior structure, which has venous flow traveling towards cranially (the azygous vein) (MOV 3224 kb)

View of the azygous vein as it travels towards the superior vena cava. At 90°, the distal azygous vein can be seen coursing over the right pulmonary artery seen in its short axis. This is a modified view obtained at the level of the mid esophagus (MOV 1065 kb)

125052_1_En_6_MOESM18_ESM.mov (451 kb)
Video 6.18 Deep transgastric view in the sagittal plane demonstrating by color Doppler turbulent flow from a right lower pulmonary vein as it drains into the posterior aspect of the inferior vena cava above the level of the diaphragm (MOV 450 kb)
Video 6.19

Transesophageal echocardiogram in an infant with hypoplastic left heart syndrome in the midesophageal four chamber view demonstrating the usual appearance for the septum primum initially however as one withdraws the probe within the esophagus, the septum is seen shifting to a more leftwards position (MOV 3564 kb)

The video represents a representative sweep in an infant with total anomalous pulmonary venous connection to the left innominate vein. The exam is initiated at the midesophageal four chamber view. From this window, modified views at the level of the mid esophagus display the right upper and lower pulmonary veins (RUPV, RLPV) and left pulmonary veins (LPVs) are seen returning to a large horizontal confluence. A large vertical vein (VV) arises from the left side of the confluence and travels anteriorly and superiorly, coursing over the left pulmonary artery (LPA) to insert into the left innominate vein (Inn V). The length of the vertical vein is best seen in a sagittal plane, with the midesophageal ascending aortic and upper esophageal aortic arch short axis views, and leftward rotation of the probe. There is no obstruction at any point to pulmonary venous return. A catheter placed in the left internal jugular vein is seen in the vertical vein by two-dimensional imaging. On this video, prominent electrocautery and Doppler mirror image artifacts are seen (MPG 38454 kb)

Orthogonal view from that shown in Video 6.22. Color Doppler interrogation of pulmonary venous confluence in infant with total anomalous pulmonary venous connection as displayed in the long axis. The blue flow away from the transducer suggests an infradiaphragmatic course (MOV 2111 kb)

Corresponding image to that displayed in Video 6.26 with color flow Doppler across right upper pulmonary vein demonstrating narrowing resulting from torsion of the pulmonary venous confluence to the left atrial anastomosis (MOV 1017 kb)