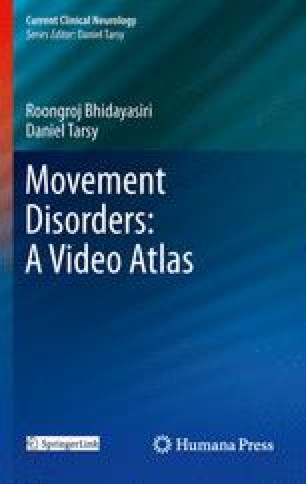 The “on-off” phenomenon in Parkinson’s disease (PD) refers to a switch between mobility and immobility in levodopa-treated patients, which occurs as an end-of-dose or “wearing off” worsening of motor function or, much less commonly, as sudden and unpredictable motor fluctuations. Motor complications occur in at least 50% of PD patients who have received levodopa for 5–10 years and constitute a major cause of disability in advanced PD. Motor fluctuations are alterations between periods of improved mobility known as “on” periods during which the patient responds to levodopa and periods of impaired motor function or “off” responses in which the patient responds poorly to levodopa.

During the “off” period, rapid alternating movements are relatively brisk in upper extremities and mildly slow in lower extremities. There is resting tremor in left leg. She has difficulty standing up. Gait is slow with reduced stride length and arm swing. Pull test shows retropulsion. During the “on” period, 45 min after levodopa, there is marked improvement in bradykinesia and gait, but left leg tremor persists. Heel tapping is improved. Pull test is now negative. Unified Parkinson’s Disease Rating Scale motor score showed 50% improvement during the “on” period compared with the “off” period. On a different day, the patient is shown fully “on” 2 h after levodopa without leg tremor and minimal limb bradykinesia. She is able to stand up without hesitation and walks briskly with normal arm swing. She now exhibits mild truncal and extremity dyskinesia which increases while carrying out rapid upper extremity movements.