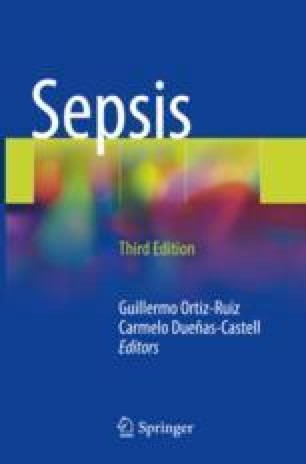 Lung infections (community- or hospital-acquired) represent the most common cause for sepsis. Diagnostic imaging plays a crucial role in the initial evaluation of patients with criteria for sepsis and suspected pulmonary infection. In patients with clinical signs and symptoms of respiratory infection, the chest X-ray allows confirming the diagnosis of pneumonia. On the other hand, the chest X-ray can be useful to assess response to treatment (in some patients), define a pattern suggesting specific germs (particularly TB), identify complications (empyema and ARDS), and propose a differential diagnosis.

Sepsis is defined as life-threatening organ dysfunction caused by a dysregulated host response to infection. Organ dysfunction is a clinical concept and is based on an increase of two or more points in the SOFA score [1].

Septic shock should be defined as a subset of sepsis in which particularly profound circulatory, cellular, and metabolic abnormalities are associated with a greater risk of mortality than with sepsis alone [1].

Lung infections (community- or hospital-acquired) represent the most common cause for sepsis, and in a variable percentage of patients, they are associated to acute lung injury (ALI) and acute respiratory distress syndrome (ARDS).

Diagnostic imaging plays a crucial role in the initial evaluation of patients with criteria for sepsis and suspected pulmonary infection.

The diagnosis of pneumonia is based on the presence of clinical manifestations of an infection (fever, chills, leukocytosis), signs, or symptoms located in the respiratory system (cough, increased sputum production, shortness of breath, chest pain, or abnormal lung exam) and the presence of new or changing opacities in the chest X-rays [2]. In young patients without cardiopulmonary disease, the diagnosis of pneumonia is relatively simple with the features mentioned above. However, in elderly patients or in those with underlying diseases (congestive heart failure, COPD, neoplasm, pulmonary fibrosis), the clinical picture may be variable, and pneumonia diagnosis could be complex.

The definition of severe pneumonia can be subjective and imprecise and is considered in the practice due to respiratory and/or circulatory failure requiring admission into the ICU [3].

In patients with clinical signs and symptoms of respiratory infection, the chest X-ray allows confirming the diagnosis of pneumonia. On the other hand, the chest X-ray can be useful to assess response to treatment (in some patients), define a pattern suggesting specific germs (particularly TB), identify complications (empyema and ARDS) and propose a differential diagnosis.

Three classic radiographic patterns are described in patients with pneumonia including:

It is important to bear in mind particular alterations or patterns in imaging studies that allow suggesting specific germs on certain clinical contexts.

Ground-glass pattern. Defined as increased attenuation of lung parenchyma that allows visualization of lung vessels and bronchial walls. In immunocompromised patients, the presence of ground glass can suggest P. jiroveci or CMV pneumonia. Pneumonia due to M. pneumoniae can also be accompanied by predominant ground-glass opacities (Fig. 5.4).
Nodules. The presence of small, randomly distributed nodules (less than 10 mm in diameter) or micronodules (less than 3 mm) can suggest hematogenous dissemination of TB or mycosis (histoplasmosis). Nodules above 10 mm in diameter are not a frequent finding in patients with CAP, and their presence may suggest specific germs such as N. asteroides, mycosis (histoplasmosis), TB, or an alternative diagnosis (metastatic disease) (Fig. 5.5).
Tree-in-bud. Defined as the presence of centrilobular linear branching densities. It may suggest TB in cases with associated apical cavitation (in immunocompromised patients) (Fig. 5.6).

Halo sign. Related to the presence of a ground-glass halo around a nodule, mass, or consolidation. In the context of a neutropenic immunocompromised patient, it can be associated to invasive mycosis (aspergillosis, mucormycosis).

The identification of microorganisms in patients with CAP varies according to the series. In a recent US series (patients with CAP who required hospitalization), a pathogen was identified in 38% of the cases, with a higher frequency of viral infection (23%) over bacterial infection (11%) [7].

Viruses represent the most frequent cause of respiratory infections in children and adults. In immunocompetent patients, most respiratory viral infections are self-limited. However, in a group of immunocompetent patients and in immunocompromised patients, respiratory viral infections present with severe tracheobronchitis, bronchiolitis, or pneumonia. The direct cytopathic effect of the virus causing damage to the respiratory epithelium can be associated to necrotizing bronchitis/bronchiolitis, diffuse alveolar damage, and/or alveolar hemorrhage. The manifestations of viral pneumonia on imaging studies depend on the degree of airway and/or lung parenchymal alteration and on the association of permeability pulmonary edema or alveolar hemorrhage. X-ray findings include normal X-ray, bronchial wall thickening, ill-defined nodules, and “patches” of peribronchovascular consolidation. HRCT may show ground glass, consolidation, thickening of peribronchovascular interstitium, thickening of interlobular septum, nodules tree-in-bud pattern, and areas of focal air entrapment with mosaic attenuation pattern [8].

Influenza virus type A is the most important respiratory virus in the general population. According to OMS, data between 10% and 20% of the world population is infected each year by the influenza virus. The mortality associated to the seasonal influenza type A virus occurs mainly in patients over 65 years. However, in the recent influenza A virus (H1N1) pandemic originated in Mexico, severe cases of pneumonia occurred in younger patients, pregnant women and obese patients. Radiographic manifestations of influenza pneumonia vary among the different series. In the study by Kloth et al. on 56 patients (36 immunocompromised and 20 immunocompetent) with influenza pneumonia, the most frequent HRCT findings included centrilobular nodules (69.6%), tree-in-bud (50%), and bronchial wall thickening (30.3%). In the group of immunocompromised patients, lung parenchymal alterations prevailed, and in the group of immunocompetent patients, the most frequent alterations were found in the airways. No differences in HRCT alterations were found between the different types and subtypes of influenza virus [9] (Fig. 5.8).

Respiratory infections due to adenovirus can present with severe pneumonia in immunocompetent patients. Sixty percent of the patients with adenovirus pneumonia require mechanical ventilation. Radiographic manifestations are similar to those of bacterial pneumonia with focal consolidation that progresses to bilateral consolidation, associated to ground-glass opacities and pleural effusion [10].

In immunocompromised patients, cases of pneumonia due to herpes simplex virus (HSV), varicella-zoster virus (VZV), and cytomegalovirus (CMV) have been described, as well as respiratory syncytial virus (RSV) or adenovirus (ADV).

In a series by Mayer et al. including 51 immunocompromised patients with clinical pneumonia and positive syncytial respiratory virus (RSV) tests, the most frequent findings in the early stages of the disease were nodules and tree-in-bud pattern. With disease progression, ground glass (64%), consolidation (56%), and small nodules (55%) were described as relevant findings. The association of sinusitis, risk factors, and the radiographic manifestations described may suggest the diagnosis RSV pneumonia [11].

It is the most frequent cause of bacterial CAP in most of the series. The characteristic radiographic pattern is of focal or lobar compromise, with consolidation predominantly affecting the inferior lobes. The clinical course is variable, with adequate response to antibiotics (in most patients) or with complications that include ARDS and death.

In recent years, respiratory infections due to methicillin-resistant (MRSA) and methicillin-sensitive (MSSA) S. aureus are considered as an important cause of severe CAP. In a multicenter study of 2259 adults hospitalized due to CAP, S. aureus was identified in 1.6% of the patients (0.7% MRSA and 1.0% MSSA). The incidence of MRSA was higher in patients undergoing chronic hemodialysis. The most frequent radiographic pattern in these patients is of bronchopneumonia, with bronchial wall thickening, ill-defined nodules, areas of peribronchovascular consolidation (multilobar and bilateral), and cavitation [12] (Fig. 5.9).

M. pneumoniae is an important cause of pneumonia in adolescents and young adults. M. pneumoniae causes an interstitial inflammatory response by mononuclear cells appearing on the X-rays as perihilar and basal reticular opacities. The germ is an extracellular pathogen, whose survival depends on the adherence to the bronchial epithelium. For this reason, the bronchial wall thickening and the presence of centrilobular nodules are frequent findings in patients with M. pneumoniae pneumonia. Other HRCT findings include ground-glass opacities and consolidation [13]. The study by Miyashita et al. comparing rapid diagnostic tests for M. pneumoniae concluded that the ImmunoCard Mycoplasma kit was not useful to diagnose this entity and that in patients with three or four criteria of the Japanese respiratory society score, the findings on HRCT may suggest the diagnosis of M. pneumoniae [14].

M. tuberculosis infection is an important cause of morbimortality associated to respiratory disease. It generally has a subacute or chronic course, but tuberculosis may manifest with acute respiratory clinical features, and differentiating it from respiratory infections of another etiology (bacterial) may prove difficult in the clinical practice.

The frequency of respiratory failure in patients with active TB ranges between 1.5 and 5%, with variable presentations (miliary TB-disseminated TB-ARDS). In a series by Mahmoud (350 patients with CAP admitted to the ICU), 3.1% of the patients developed ARDS associated to TB. In more than half of the patients, the suspicion of TB was based on radiographic manifestations [15].

Invasive Aspergillus infection is an important cause of pulmonary sepsis in immunocompromised patients. It has been traditionally described in neutropenic patients. However, invasive aspergillosis has also been found in non-neutropenic patients (with COPD, in solid organ transplant recipients and in ICU patients). Radiographic manifestations of invasive aspergillosis are variable. In the angioinvasive form, radiographic manifestations include large nodules (with halo sign), consolidation, and cavitation. In aspergillosis with airway invasion (usually associated to parenchymal disease), the findings described include tree-in-bud, centrilobular nodules and consolidation [(17, 18).].

P. jiroveci pneumonia is described in immunocompromised patients due to HIV infection or in those immunocompromised without HIV infection (immunosuppression due to drug therapy, posttransplant, etc.). The clinical course is variable in the two groups (subacute in the first and acute in the second). In both groups, the main radiographic manifestation is the presence of ground-glass opacities with a geographic or diffuse pattern. Other less frequent manifestations include consolidation, crazy-paving pattern, cysts, intralobular lines, and nodules [19] (Fig. 5.10).

The most frequent complications associated to pneumonia, and that may be evaluated with imaging studies, correspond to secondary pleural infection, lung parenchymal necrosis (abscess), and ARDS.

The microbiology of pleural disease is different to that described in patients with CAP. In a multicenter study of intrapleural sepsis, the most common germs associated to pleural infection were Streptococcus intermedius (24%), Streptococcus pneumoniae (21%), and other Streptococci (7%), followed by anaerobic bacteria (20%) and staphylococci

(10%). The most common pathogens in hospital-acquired infections were staphylococci (35%) and gram-negative bacteria (23%) [20]. Ultrasound studies allow characterization of the pleural liquid and defining the presence of particles or septa and associated pleural thickening. CT allows defining the precise distribution of pleural collections, the presence of pleural thickening (with or without lung entrapment), and characterizing associated parenchymal alterations (Fig. 5.11).

It is defined as a circumscribed area of necrotic tissue or pus within the lung parenchyma that can cavitate and show an air-fluid level due to the occurrence of bronchopleural fistulas. Lung abscesses may be primary (generally related to aspiration) or secondary (due to bronchial obstruction) [21]. In imaging studies, lung abscesses appear as a mass with well-defined margins, cavitation (liquid or air densities within the lesion), and walls of variable thickness (according to time of evolution) (Fig. 5.12).

Acute respiratory distress syndrome (ARDS) is a capillary permeability edema characterized by increased permeability of capillary endothelial cells and alveolar epithelial cells with refractory hypoxemia. The incidence of ARDS in patients with sepsis is 6% to 7% in Western Hemisphere countries. ARDS may be either primary or pulmonary (related to pneumonia /aspiration) or secondary or extrapulmonary (trauma, nonpulmonary sepsis, pancreatitis, etc.) [22]. Radiographic manifestations depend on the evolution of the ARDS and the degree of the lung’s fibroproliferative response. During the early phases, imaging studies show ground-glass opacities and/or consolidation of variable distribution (patchy, AP attenuation gradient, or diffuse distribution). In patients with significant fibroproliferative changes, HRCT findings include ground-glass opacities, intralobular densities, distorted lung architecture, traction bronchiectasis, and honeycombing pattern. In a recent cohort of patients with ARDS, decreased respiratory compliance was associated to increased reticulation and traction bronchiectasis in an HRCT performed 14 days after the ARDS diagnosis. In theory, identification and quantification of fibroproliferative changes in HRCT can predict poor outcomes and a negative impact on ARDS patient’s quality of life [23] (Fig. 5.13).