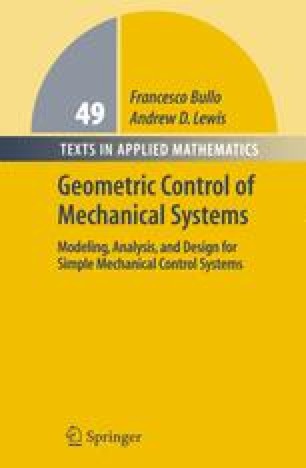 In Chapter 8 we saw that it was possible to come to a fairly complete understanding of low-order controllability of affine connection control systems, and that this sort of controllability was closely related to the notion of kinematic controllability. Implicit in these observations is that kinematic controllability is useful for motion planning for affine connection control systems. In this chapter we illustrate this by looking in detail at a couple of nontrivial examples. The material in this chapter has been developed only recently in the research literature. As mentioned in Chapter 8, the idea of a kinematic reduction is inspired by the work of Arai, Tanie, and Shiroma [1998], and Lynch, Shiroma, Arai, and Tanie [2000]. A first formal definition was given in [Bullo and Lynch 2001], while more complete work followed in the papers [Bullo and Lewis 2003a, Martínez, Cortés, and Bullo 2003b]. The kinematic reduction results of Section 8.3 provide a means of reducing the order of the dynamical systems being considered from two to one. The idea of lowering the complexity of representations of mechanical control systems can be related to numerous previous efforts, including work on hybrid models for motion control systems [Brockett 1993], oscillatory motion primitives [Bullo, Leonard, and Lewis 2000], consistent control abstractions [Pappas and Simić 2002], and maneuver automata [Frazzoli, Dahleh, and Feron 2003]. For a general introduction to motion planning, we refer to [Latombe 1991].