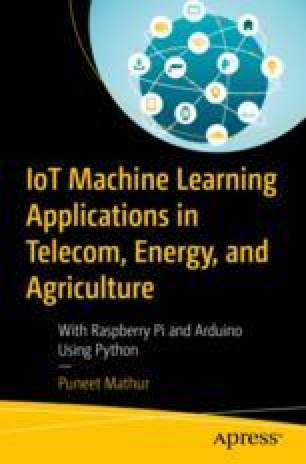 In a continuation to Chapter  5 where you left off by connecting the three-phase Conzerv EM6400 Energy Meter from Schnieder Electric, in this chapter you will do two things. First, you’ll write up the code for getting data from the EM6400 Energy Meter on the Arduino Mega slave and then reading it into Python on the Raspberry Pi master. The second is to set up another energy meter using single phase electrical connections and then read its data directly into Raspberry Pi via the USB serial Modbus protocol. The second setup is to enable those enthusiasts of the IIoT who want to get the feel of how real-life data is generated by industrial devices such as energy meters and machines. In the real world, however, you will see three-phase energy meters and machines like EM6400 communicating through the Modbus protocol. Again, I want to remind the readers that we are using the Arduino Mega 2560 because it is a truly industrial grade SBC that supports connecting multiple devices like energy meters or industrial machines connected to each other serially or in a daisy wheel electrical configuration. If you have just a single device, regardless of single phase, two phase, or three phase, you can connect it directly to a Raspberry Pi 3B+ like I show you in this chapter. So let’s get started writing the code to get data from the EM6400 Energy Meter on the Arduino. The code for this is available in the file named modbus01_EM6400_Tested.ino code bundle that you can download from www.PMAuthor.com/raspbian/. Remember to open it up in the Arduino IDE and configure and test the Arduino IDE like I showed you in Chapter  3 before executing the code.