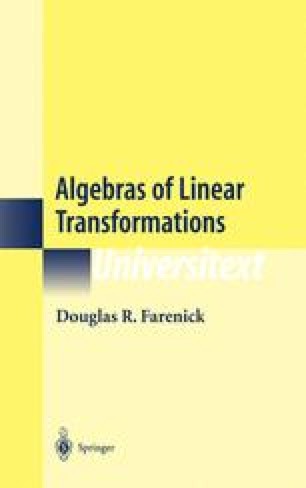 The study of finite-dimensional algebras is in many ways a natural outgrowth of our thinking about numbers. Early in the 1800s, the representation of complex numbers as points in the real plane was widely known. To many at the time, this representation indicated how a geometric object (namely, the plane) could be made into a number field, and mathematicians began to question whether 3-dimensional space is in some way a number field. This proved to be problematic, however in a landmark paper published in 1844, W.R. Hamilton introduced a 4-dimensional “hypercomplex” number system that had all the arithmetical properties of ℝ or ℂ except for the commutative law of multiplication. Hamilton called these hypercomplex numbers quaternions. In seeking further constructions of this type, mathematicians were soon led conceptually from ordinary geometrical space into a realm where the number systems acquired a much greater level of abstraction. The progression from real and complex numbers to abstract, hypercomplex numbers culminates in the concept of an algebra.

Linear Transformation Group Algebra Division Algebra Vector Space Versus Simple Algebra
These keywords were added by machine and not by the authors. This process is experimental and the keywords may be updated as the learning algorithm improves.
This is a preview of subscription content, log in to check access.