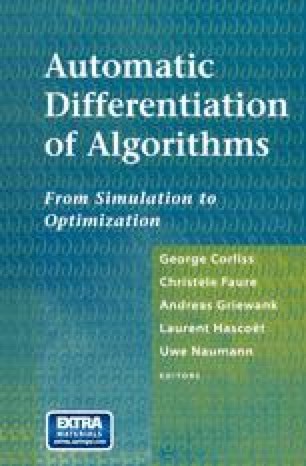 In 1983 Pantoja described a stagewise construction of the Newton direction for a general class of discrete time optimal control problems. His algorithm incurs amazingly low overheads: the cost (measured in target function evaluations) is independent of the number of discrete time-steps. The algorithm can be modified to verify that the Hessian contains no eigenvalues less than a postulated quantity, and to produce an appropriate descent direction in the case where the Hessian fails to be positive definite and global convergence becomes an issue. Coleman and Liao have proposed a specific damping strategy in this context. Here we describe how automatic differentiation can be used to implement Pantoja’s algorithm, and we briefly consider some alternative globalization strategies, within which AD techniques can be further deployed.

Optimal Control Problem Global Convergence Trust Region Descent Direction Automatic Differentiation
These keywords were added by machine and not by the authors. This process is experimental and the keywords may be updated as the learning algorithm improves.
This is a preview of subscription content, log in to check access.