An Atlas of Mitral Valve Imaging 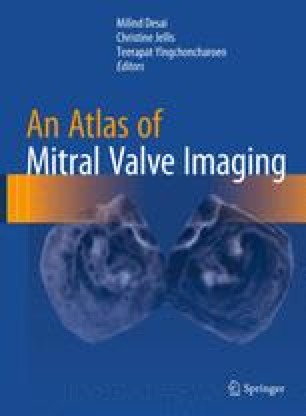 The MitraClip (Fig. 6.1) is a percutaneous mitral valve repair system from Abbott Vascular. The device incorporates a steerable guide catheter that traverses the interatrial septum and enables accurate positioning and trajectory of the clip (Fig. 6.2).

Transesophageal echo (TEE) biplane view at 125° and 11°, demonstrating excessive motion and flail of the A2 segment of the anterior mitral valve leaflet (AVI 3872 kb)

The device can be seen approaching the valve, using 3D imaging (AVI 2332 kb)

When both clip arms are adequately aligned, the clip is positioned perpendicular to the line of leaflet coaptation. Both leaflet tips must be fully inserted on both sides of the device between the grippers and clip arms to ensure stability of attachment (AVI 4108 kb)

After deployment on an initial MitraClip across the medial aspects of A2 and P2, there is good leaflet opposition with moderate (2+) residual MR (AVI 4226 kb)

3D zoom imaging is used to visualize the MitraClip from the left atrium. The clip is well positioned, with good attachment to both leaflets, and creates a double-orifice valve appearance (AVI 2359 kb)

If there is residual MR, a second MitraClip is often deployed to improve leaflet coaptation. Care must be taken not to disrupt the first clip and to ensure that the valve orifice does not become stenotic. There is also increased risk of snaring the second clip in the subvalvular apparatus, as the chordae are now more centrally positioned after deployment of the first clip. In this example, deployment of a second clip is seen immediately adjacent to the first clip on the lateral aspect of the A2 and P2 scallops (biplane view) (AVI 4300 kb)

An excellent final result is achieved, with only trivial MR seen on this bicommissural view with simultaneous gray-scale and color Doppler images (AVI 5098 kb)

The adjacent MitraClips create a double orifice mitral valve, which can be visualized in 3D from both the left ventricular (left image) and left atrial (right image) aspects (AVI 2534 kb)

TEE 120° view shows the mitral valve with two MitraClips deployed side-by-side on the central and medial aspects of the valve, with good leaflet coaptation (AVI 10853 kb)

3D zoom view of the mitral valve from the left atrial perspective. The Mitraclips can be seen side-by-side, apposing the anterior and posterior leaflets (AVI 1076 kb)

The device is aligned with the mitral valve using the steerable guide catheter, which bends at 90° in the left atrium after traversing the interatrial septum (AVI 7462 kb)

The device is aligned perpendicular to the valve leaflets. The long-axis (120°) view is helpful to visualize both device arms and both mitral valve leaflets simultaneously (AVI 7145 kb)

Once the MitraClip is adequately positioned with optimal leaflet insertion between the grippers and arms, the clip is deployed (AVI 7453 kb)

Using 3D imaging of the mitral valve from a left atrial view, the clip can be seen apposing the lateral aspects of the leaflets (A1/P1 scallops) (AVI 1149 kb)

3D image showing the guide catheter in the left atrium approaching the mitral valve. The position and trajectory are adjusted to optimize perpendicular alignment of the MitraClip with the valve leaflets (AVI 979 kb)

A TEE two dimensional (2D) long-axis view of the mitral valve demonstrates that the MitraClip is well positioned, with stable attachment to both leaflets, and is ready for deployment (AVI 6948 kb)

3D imaging of the left atrial aspect of the mitral valve prosthesis. The arrow points to a region of dehiscence from which the paravalvular leak originates (AVI 3399 kb)

3D image of the bileaflet mitral valve prosthesis with the occluder device in situ, adjacent to the anterolateral aspect of the valve (AVI 438 kb)

3D image of the mitral valve from a left atrial view, showing a guide catheter through the anterolateral region of valve dehiscence (2 o’clock position) (AVI 567 kb)

3D reconstruction of the mitral valve from the left atrial view. The paravalvular leak was successfully closed using 10-mm and 12-mm Amplatzer Vascular Plug II devices at the 2 and 3 o’clock positions (AVI 754 kb)

310450_1_En_6_MOESM52_ESM.avi (501 kb)
Video 6.51 Biplane color Doppler TEE image at 125° and 14° after deployment of the occluder in the anterolateral region of valve dehiscence. The Amplatzer occluder devices can be seen adjacent to the valve replacement, with only a trivial residual paravalvular leak (AVI 501 kb)
Video 6.52

Valve dehiscence is not evident on 3D reconstruction (Philips 3DQ) of the mitral valve replacement from a left atrial view, owing to the small size of the orifice of the leak (AVI 1249 kb)

Transesophageal 0° view demonstrating the Carpentier-Edwards prosthetic mitral valve in situ, with calcification and immobility of the posteromedial leaflet (AVI 5076 kb)

3D zoom of the bioprosthetic mitral valve from the left atrium, demonstrating thickening and immobility of the posteromedial prosthetic leaflet (AVI 996 kb)

3D imaging after deployment of the fully expanded and normally functioning mitral valve prosthesis; the guidewire is still in situ (AVI 1006 kb)

310450_1_En_6_MOESM75_ESM.mpg (415 kb)
Video 6.74 After valvuloplasty, a transesophageal view of the mitral valve at 20° with color Doppler imaging demonstrates reduced turbulence of the diastolic forward flow and only trivial to mild regurgitation (MPG 414 kb)
Video 6.75