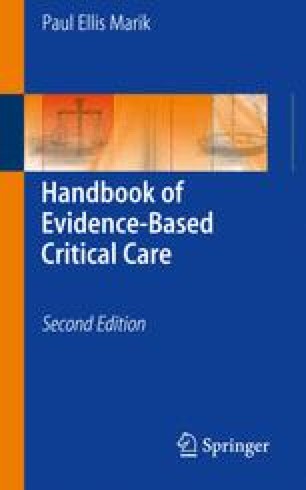 Anemia is common in critically ill patients. More than 90% of patients have subnormal hemoglobin by the third day of ICU admission. Despite the fact that blood transfusions have not been shown to improve the outcome of ICU patients (see below) and that the current guidelines recommend blood transfusion only when the hemoglobin falls below 7.0 g/dl, almost half of all patients admitted to an ICU receive a blood transfusion.1,2 The etiology of anemia of critical illness is multi-factorial and complex. Repeated phlebotomy, gastrointestinal blood loss, and other surgical procedures contribute significantly to the development of anemia. Red cell production in critically ill patients is often abnormal and is involved in the development and maintenance of anemia. The pathophysiology of this anemia includes decreased production of erythropoietin (EPO), impaired bone marrow response to erythropoietin, and reduced red cell survival.

Blood Transfusion West Nile Virus Transfusion Trigger Gastrointestinal Blood Loss Hemolytic Reaction
These keywords were added by machine and not by the authors. This process is experimental and the keywords may be updated as the learning algorithm improves.
Download chapter PDF

Anemia is common in critically ill patients. More than 90% of patients have subnormal hemoglobin by the third day of ICU admission. Despite the fact that blood transfusions have not been shown to improve the outcome of ICU patients (see below) and that the current guidelines recommend blood transfusion only when the hemoglobin falls below 7.0 g/dl, almost half of all patients admitted to an ICU receive a blood transfusion.1, 2 The etiology of anemia of critical illness is multi-factorial and complex. Repeated phlebotomy, gastrointestinal blood loss, and other surgical procedures contribute significantly to the development of anemia. Red cell production in critically ill patients is often abnormal and is involved in the development and maintenance of anemia. The pathophysiology of this anemia includes decreased production of erythropoietin (EPO), impaired bone marrow response to erythropoietin, and reduced red cell survival.

For much of the last century, RBC transfusion has been viewed as having obvious clinical benefit. Blood transfusion was considered as a life-saving strategy and an arbitrary threshold of 10 gm/dl was used as a transfusion trigger. However, over the last 20 years, RBC transfusion practice has come under increased scrutiny. Initially this was driven by concerns over transfusion-related infections, HIV in particular. While the risk of transfusion-transmitted infections has received considerable attention, the risks of this complication with modern blood-banking techniques are now exceedingly remote.3 On the other hand, it is now becoming clear that there are other important, less-recognized risks of RBC transfusion related to RBC storage effects and to immunomodulating effects of RBC transfusions which occur in almost all recipients.4

The “toxicity” of blood is related to a number of factors including the following:

Transfusion-related acute lung injury (TRALI) syndrome is an “uncommon” condition characterized by the abrupt onset of respiratory failure within hours of the transfusion of a blood product. It is usually caused by anti-leukocyte antibodies, resolves rapidly, and has a low mortality. A single unit of packed cells or blood component products (FFP and platelets) is usually implicated in initiating this syndrome. It has, however, recently been recognized that the transfusion of blood products in critically ill or injured patients increases the risk for the development of the ALI/acute respiratory distress syndrome (ARDS) 6–72 h after the transfusion. This “delayed TRALI syndrome” is common, occurring in up to 25% of critically ill patients receiving a blood transfusion, and is associated with a mortality rate of up to 40%.8 While the delayed TRALI syndrome can develop after the transfusion of a single unit, the risk increases as the number of transfused blood products increases. The management of both the classic and delayed TRALI syndromes is essentially supportive.

In health, the amount of oxygen delivered to the whole body exceeds resting oxygen requirements almost fourfold. An isolated decrease in hemoglobin concentration to 10 g/dl with all other parameters remaining constant will result in an oxygen delivery that remains approximately twice that of the resting oxygen consumption. Humans have a remarkable ability to adapt to anemia by increasing cardiac output (in the absence of volume depletion), increasing microcirculatory density, increasing red cell synthesis of 2,3-DPG with a resultant rightward shift of the oxyhemoglobin dissociation curve (aids oxygen unloading), and by increasing oxygen extraction. Healthy volunteers can tolerate isovolemic hemodilution down to a hemoglobin content of 4.5 without apparent harmful effects.9 However, due to the high extraction ratio of oxygen in the coronary circulation, coronary blood flow appears to be the major factor which limits the tolerance of low hemoglobin concentrations. In experimental animal models of coronary stenosis, depressed cardiac function occurs at hemoglobin concentrations between 7 and 10 g/l.10, 11

When Should Patients Be Transfused?

Patients without cardiovascular disease may tolerate hemoglobin levels as low as 7 g/dl and possibly lower with minimal sequela. Although physiological reserve decreases with aging, it appears that elderly patients (>65 years) without cardiovascular disease may similarly tolerate hemoglobin concentrations as low as 8 g/dl without untoward effects. The current data clearly demonstrate that blood transfusions increase the risk of infection, ARDS, and death. Evidence-based guidelines would therefore suggest that patients without cardiovascular disease and who are not actively bleeding should be transfused only when the hemoglobin concentration falls below 7 g/dl. Furthermore, it could be argued that even in these patients, a transfusion is indicated only if the patient has symptomatic anemia (i.e., signs of myocardial or tissue ischemia). These recommendations are supported by the landmark Canadian Critical Care Trials Group Study (TRICC) which demonstrated the safety of using a “transfusion trigger” of 7.0 g/dl in critically ill ICU patients.12 Furthermore, in the subgroup of patients with cardiovascular disease in the TRICC study (none with acute coronary syndromes), the restrictive transfusion strategy was not associated with an increased risk of complications or mortality as compared to the liberal transfusion group.13

The traditional 10/30 transfusion trigger can no longer be supported. In the absence of acute bleeding, hemoglobin levels consistent with the TRICC trial (7.0–9.0 g/dl) are well tolerated.12 The American Association of Blood Banking has recommended titrating transfusion requirements to parameters of severity of illness rather than arbitrarily defined hemoglobin levels.14 This recommendation is in agreement with the more recent recommendations of the American Society of Anesthesiologists Task Force,15 as well as the Canadian Guidelines which suggest “there is no single value of hemoglobin concentration that justifies or requires transfusion; an evaluation of the patient’s clinical situation should also be a factor in the decision.”16

Anemia is well recognized to be a poor prognostic factor in patients with congestive cardiac failure as well as acute coronary syndromes (ACS’s).17, 18 Contrary to conventional wisdom, this does not mean that blood transfusion improves outcome. Rao and colleagues19 examined the potential impact of red blood cell transfusion in 24,111 patients with ACS. Blood transfusion was an independent predictor of myocardial infarction and 30-day all-cause mortality (adjusted hazard ratio 3.94). Furthermore, the 30-day mortality was significantly increased when transfusions were given to patients with hematocrits of 25% or above (compared to those with a hematocrit below 25%). Similarly, Aronson and colleagues20 demonstrated an increase in mortality and the composite end point of death/recurrent MI/heart failure in patients with acute myocardial infarction who had a hemoglobin >8 g/dl and received a blood transfusion. Similar observations have been made by other authors.21, 22, 23 The increased risk of infarction and death is probably related to the pro-thrombotic and pro-inflammatory properties of stored blood.24

Carson and colleagues25, 26 studied patients who underwent surgery and declined blood transfusions for religious reasons. In those patients without cardiovascular disease and who had a baseline hemoglobin of between 6 and 6.9 g/dl, there was no significant increase in perioperative mortality (OR 1.4; 95% CI 0.5–4.2) if the blood loss was less than 2.0 g/dl. However, in patients with cardiovascular disease, preoperative anemia was associated with a significant increase in perioperative mortality. These data confirm that humans can adapt to very low hemoglobin levels, with cardiovascular disease being the major limiting factor. These data suggest that in patients undergoing surgery who have significant coronary artery disease, the hemoglobin should be increased to about 10 g/dl prior to surgery. This is best achieved with the use of EPO and iron, thereby avoiding a blood transfusion. Blood transfusions are independent risk factors for perioperative infections, ARDS, and death (and perhaps tumor recurrence).7, 27

Except for patients with severe acute blood loss, there is no disease state that benefits from blood transfusion.

Summary of When to Transfuse