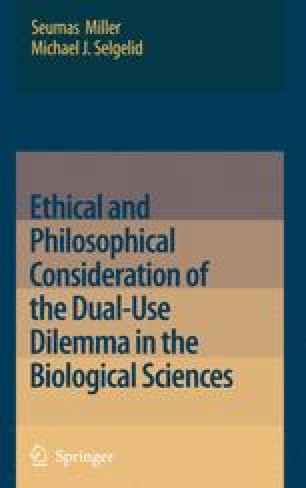 Research in the biological sciences undertaken for the purpose of weaponising biological agents so that they can be used to kill or cause illness in human populations is presumably morally impermissible, whether the research in question is undertaken by state actors, (non-state) terrorist groups, criminal organisations or malevolent individuals. So much is proclaimed in the Biological Weapons Convention (BWC), notwithstanding the fact that arguments have been used from time to time to justify the use of biological weapons in the context of a just war. It has been argued, for example, that some biological weapons are more “humane” than some conventional weapons. It has also been argued that biological weapons development during peacetime may play an important role in deterrence [79]. It is not within the scope of this report to discuss the moral complexities arising from the use of various forms of weaponry, albeit this is an important and somewhat neglected topic. However, we note that, in so far as biological weapons are a species of weapons of mass destruction (WMD), there is a general moral objection to their development and use, namely, that inevitably they target civilian populations and not merely combatants. As such, they violate the so-called jus in bello condition of just war theory; the condition that, among other things, gives expression to the moral principle of civilian immunity in war.

Severe Acute Respiratory Syndrome Biological Weapon African National Congress Myxoma Virus Smallpox Virus
These keywords were added by machine and not by the authors. This process is experimental and the keywords may be updated as the learning algorithm improves.
Download to read the full chapter text

Cite this chapter as:
(2008) Experiments of Concern. In: Ethical and Philosophical Consideration of the Dual-Use Dilemma in the Biological Sciences. Springer, Dordrecht