The Kaiser Wilhelm Institute for Anthropology, Human Heredity, and Eugenics, 1927–1945 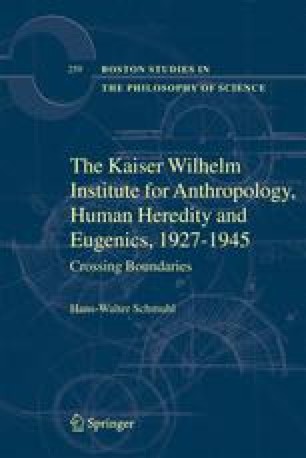 In the Realm of Opportunity: The Kaiser Wilhelm Institute for Anthropology, Human Heredity and Eugenics during World War II, 1938/42–1945

Chapter
Part of the Boston Studies in the Philosophy of Science book series (BSPS, volume 259)

On March 8, 1940, Eugen Fischer wrote a long, confidential letter to Otmar von Verschuer, director of the Institute for Genetic Biology and Race Hygiene at the University of Frankfurt at that time. In this letter Fischer expressed critique — and certainly also self-critique — about the scientific development of his institute since the mid-1930s.

Club Foot Oxygen Deprivation National Socialist State Human Heredity Jewish Question
These keywords were added by machine and not by the authors. This process is experimental and the keywords may be updated as the learning algorithm improves.
Download to read the full chapter text