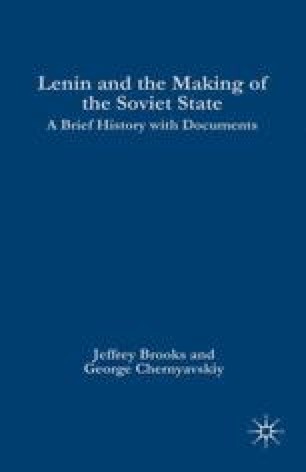 Lenin’s health began to fail in 1921. In August 1921, he wrote to M. Gorky, “I am so tired that I am incapable of the slightest work.”1 Undoubtedly, the political and personal failures of the past year (the defeat in Poland, the failure of War Communism, and the death of his former lover Inessa Armand2), as well as Lenin’s efforts to solve the regime’s economic, political, cultural, and other problems single-handedly, contributed to his health crisis.

Central Committee Donets Basin Personal Failure October Revolution Outstanding Ability
These keywords were added by machine and not by the authors. This process is experimental and the keywords may be updated as the learning algorithm improves.
Download to read the full chapter text

Cite this chapter as:
Brooks J., Chernyavskiy G. (2007) The Sick Leader: De Facto Removal from Power. In: Lenin and the Making of the Soviet State. The Bedford Series in History and Culture. Palgrave Macmillan, New York