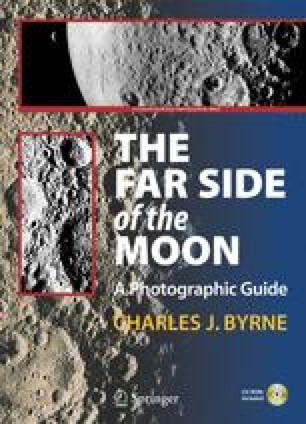 The South Pole-Aitken Basin is the most prominent feature of the far side. Centered at 54° south latitiude and 169° west longitude, its rim extends from 15° south latitude (just south of the Korolev Basin) to beyond the South Pole of the Moon, at 80°south latitude, over on the near side. The crater Aitken is not especially notable in itself; it simply happens to be near the rim of the basin, opposite the South Pole (also near the rim), and so both Aitken and the pole are convenient references.

Lunar Orbiter Crater Floor Mare Basalt South Latitude Secondary Crater
These keywords were added by machine and not by the authors. This process is experimental and the keywords may be updated as the learning algorithm improves.
This is a preview of subscription content, log in to check access.