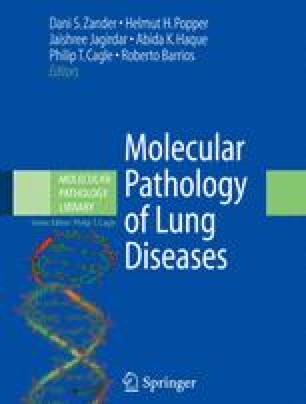 In multicellular organisms, cell death plays an important role in development, morphogenesis, control of cell numbers, and removal of infected, mutated, or damaged cells. The term apoptosis was first coined in 1972 by Kerr et al.1 to describe the morphologic features of a type of cell death that is distinct from necrosis and is today considered to represent programmed cell death. In fact, the evidence that a genetic program existed for physiologic cell death came from the developmental studies of the nematode Caenorhabditis elegans.2 As time has progressed, however, apoptotic cell death has been shown to occur in many cell types under a variety of physiologic and pathologic conditions. Cells dying by apoptosis exhibit several characteristic morphologic features that include cell shrinkage, nuclear condensation, membrane blebbing, nuclear and cellular fragmentation into membrane-bound apoptotic bodies, and eventual phagocytosis of the fragmented cell (Figure 4.1).

Chronic Obstructive Pulmonary Disease Programme Cell Death Acute Respiratory Distress Syndrome Alveolar Epithelial Cell NSCLC Cell Line
These keywords were added by machine and not by the authors. This process is experimental and the keywords may be updated as the learning algorithm improves.
Download to read the full chapter text