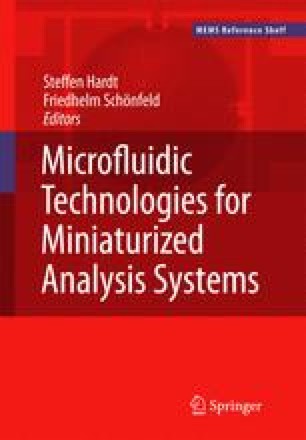 Many chemical and biochemical analysis methods involve performing a sequence of processes that can be broadly classified in terms of sample preparation, reactions, and product analysis. Since the reaction products often contain mixtures of multiple chemical species, subsequent analytical steps must be capable of separating and identifying the individual components. Electrophoresis, which relies on inducing detectable differences in migration behavior between charged species under the influence of an applied electric field, has proven to be a highly versatile analytical technique owing to a favorable combination of characteristics including relatively simple hardware design and compatibility with a wide range of analytes including biological macromolecules (e.g., DNA, proteins). More recently, there has been considerable interest in adapting electrophoresis technology to miniaturized microfluidic formats with the aim of producing portable low-cost versions of conventional benchtop-scale instrumentation. Ultimately, it is envisioned that these efforts will enable electrophoresis to become an integral component of self-contained “lab-on-a-chip” devices capable of putting the power to perform a variety of sophisticated chemical, biological, and biomedical assays directly in the hands of those who need the information most.

Capillary Electrophoresis Microfluidic Device Microfluidic Chip Microfluidic System Separation Channel
These keywords were added by machine and not by the authors. This process is experimental and the keywords may be updated as the learning algorithm improves.
Download to read the full chapter text