History of Computing and Education 2 (HCE2) 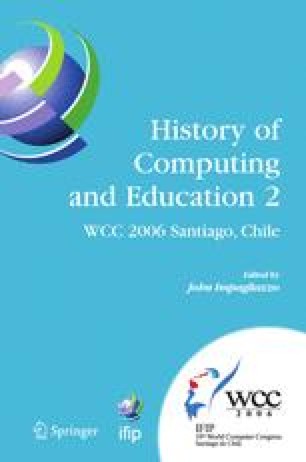 A Creative Approach to Educational Computing

This auto-ethnographical narrative traces the history of an educational computing professional. Christina Preston describes her experience of computers began in the 1950s as her father was a computer professional. After graduating, she developed her skills as a journalist and short story writer for women’s magazines at the same time as teaching English, Drama and Media studies in London secondary school. Her late introduction to computers through her own children was typical of UK teachers in the early nineteen eighties who suddenly found that they were expected to train in Information Technology and to teach the subject as part of the curriculum although this had not been included in their teacher training. Christina Preston is now the chair of the international industrial and government funded MirandaNet Fellowship, which is a community of practice for teachers, advisors, teacher educators, software designers and ICT policy makers. In this ethnographical study she uses her women’s magazine writing skills to recreate her own experiences in a way that will help advisers and teacher educators to understand how the history of many teachers who are middle aged in 2006 has affected their attitude to computers and their willingness to use them in classrooms. Critical incidents include her introduction to mainframes as a child, her own children’s experiences, her first ICT training, the first lesson she give and her authorship of educational software. The unexpected death of her daughter opens her mind to the potential of computers in democratic participation and active citizenship between local, regional and national community.

Teacher Training Critical Incident Educational Software Creative Approach Educational Computing
These keywords were added by machine and not by the authors. This process is experimental and the keywords may be updated as the learning algorithm improves.
Download to read the full conference paper text