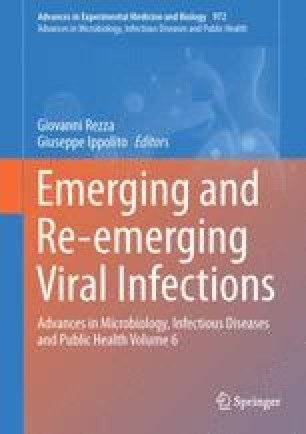 In the last decades, several viruses emerged, as the consequence of cross-species passage from animal reservoirs to human being. Emerging infections always represent a significant challenge for public health system as knowledge about specific pathogens are generally little while and no/few effective interventions are available. In this volume we explored special aspects of emerging infectious diseases including: the application of the theory of focality of diseases to infective syndrome; the human-animal inter-face focusing on influenza; the role of bats as main reservoir of emerging and novel human pathogens; Middle East Respiratory Syndrome Coronavirus (MERS-CoV) epidemiology and clinical presentation; immediate impact on human health of the last Zika virus outbreak occurred in Pacific Ocean and the Americas; the role and potential application of animal models for the study of emerging infections, to improve disease knowledge and for developing therapeutic drugs during ongoing outbreak.

In the last decades, several viruses emerged, after cross-species passage from animal reservoirs and then spreading in human populations; the Ebola virus, two different coronaviruses causing the severe acute respiratory syndrome (SARS-CoV) and the Middle-east respiratory syndrome (MERS-CoV), and the Nipah virus, are paradigmatic examples of biological agents completely new for humans, with high epidemic potential, but also prone to disappear in case early detection and intervention are ensured (Morse 1993; Fauci and Morens 2012).

Other viruses expanded their geographical area of activity from the original ecological niche to new lands and continents, as recently demonstrated by the large outbreaks of Zika or Crimean-Congo haemorrhagic fever in Spain, and dengue in Madeira (Portugal). Several arboviruses represent paradigmatic examples of microorganisms which found the conditions for their spread in previously unaffected areas inhabited by completely susceptible populations, increasing their epidemic potential. In this group, we find several agents transmitted by Aedes spp. mosquitoes, from dengue to chikungunya and Zika (McCloskey et al. 2014).

Vector-borne viruses are not the only emerging agent which represent a threat for human health, and other zoonotic viruses are increasingly impacting on the burden of disease at the global level (Morens and Fauci 2013). To this regard, zoonoses account for nearly two-thirds of human infectious diseases, in part due to the increasing anthropogenic pressures on the environment. Leading drivers of infectious disease emergence in humans from wildlife are multiple and complex, and broad and novel approaches are required to tackle them. The “One Health” approach, for example, considers the human-animal-environment interface with a single perspective (IOM 2015). The aim is to promote synergies among public health, information and communication, human and animal health, veterinary and medical approaches, environmental and ecological sciences, mathematical modeling and geographic information systems, anthropological and behavioral expertise (Zumla et al. 2015).

Emerging viruses represent an important challenge for global public health, and prompt intervention is needed in order to put outbreaks under control (McCloskey et al. 2014). First of all, early diagnosis of the agent is extremely important to rapidly identify the viral threat and to start the intervention as soon as possible (Memish et al. 2014). To this end, a syndromic approach and the use of an appropriate case-definition may be useful to hypothesize the nature of the disease. However, as demonstrated with Ebola in the large outbreak occurred in West Africa in 2014, only a small proportion of cases had hemorrhagic manifestations, thus relying on bleeding did not provide a valid clue to diagnosis. Laboratory diagnosis is more specific and represents the gold standard for the diagnosis of an emergent virus. However, in certain contexts, it may be difficult to perform relatively sophisticated tests under adverse environmental conditions. Moreover, the lack of protective equipment and high security level laboratories is an obstacle to handling potentially infected samples. To overcome this problem, mobile BSL4 labs have been extensively provided by the international community to allow Ebola virus infection diagnosis during the recent outbreak of Ebola in West Africa.

Response capacity, especially by resource poor countries, and rapid intervention in the context of explosive outbreaks is key to mitigate or control epidemic events (Anema et al. 2014). With diseases like Ebola, that are transmitted through direct contact with diseased persons, dead bodies, or bodily fluids, and are amplified by the family and the hospital setting or burial ceremonies, avoiding contact with physical barriers is rather efficient and productive. Measures as the availability of a large number of hospital beds to keep infected patients away from the community, protective equipment and training of health care workers to avoid direct contact with patient fluids, restriction of movements to minimize the risk of introduction of the infection to naïve areas are likely to succeed when complemented by correct information, lab evidence based decision making for keeping patients under isolation, high quality care and treatment of confirmed patients.

With mosquito-transmitted diseases, which recently caused several large outbreaks in many poor resource countries, prevention also play a major role. A paradigmatic example is represented by the spread of chikungunya and Zika in Latin America and Caribbean, where dengue was already present. However, mosquito control activities may be successful in controlling local outbreaks occurring in temperate areas but do not appear able to mitigate large epidemics in tropical areas. For this reason, the availability of safe and effective vaccines is essential in order to keep virus circulation under control.

There are no vaccines available against most emerging infections, and this may be explained by a series of factors. First, for their own nature, emerging infections have often epidemic patterns that minimize the feasibility of large efficacy trials, which are now considered the gold standard for vaccine evaluation. In fact, the conduction of large studies is limited by the unpredictability of large outbreaks where vaccines may be tested on large population groups; secondly, for the same reason, vaccine demand may be difficult to assess; thirdly, limited resources are allocated to vaccine research and development when economic return is not ensured.

For example, identifying the target populations for vaccination campaigns is not an easy task. For Ebola, health care workers in high risk areas might be a target, as well as health professionals who intervene in case of outbreaks. Finally, ring vaccination of direct and indirect contacts of infected patients might be vaccinated to reduce the risk of disease and transmission in an affected area.

Vaccines against a few arboviral diseases, such as those against yellow fever and Japanese encephalitis, have been extensively used. In particular, the live attenuated vaccines against yellow fever, which was created in the 1930s, has contributed to the control of the disease both in Africa and in South America. However, a vaccine against dengue, whose target is represented by the local communities in affected area of the world, has proven to be only partially effective, and vaccines against chikungunya and Zika are still lacking.

Nevertheless, making vaccines and effective drugs to be used as prophylaxis in case of detection of early chains of transmission of emerging viruses, as it may happen with a mutated strain of avian influenza (i.e., a “humanized” H5N1 or H7N9 flu virus) would be very useful if complemented by effective molecular surveillance (Hui and Zumla 2015; Marston et al. 2014).

In this volume, we present a series of article on mechanisms and drivers of emergence of novel virus infections in human population, trying to focus the attention on aspects which have not frequently addressed before.

For this special issue, the articles written by internationally renowned experts cover several areas of research. In the paper by Busani et al., the application of the theory of focality of diseases to infectious disease is discussed, providing paradigmatic examples of viral diseases (Busani et al. 2016). The proposed approach is represented by detailed mapping of the areas of activity of biological agents causing natural focal diseases along with evidence-based interventions, such as targeted vaccination.

In Castrucci review, the Human-animal interface is discussed, with a a speficic focus on influenza. The topic is particularly important, since “humanization” of avian viruses represents a persistent threat to human health (Donatelli et al. 2016).

In the Serra-Cobo and López-Roig paper, the roles played by bats in emerging infections is presented and discussed. Maintenance mechanisms and transmission of bat viruses were analyzed, taking into account the phylogenetic history, coevolution processes, bat adaptation to live in different environments, and specific behaviour of different species. These factors allow to assess the epidemiological risk for humansand to plan preventive measures (Serra-Cobo and López-Roig 2016).

In Azhar et al. report, an overview of Middle East Respiratory Syndrome Coronavirus (MERS-CoV) epidemiology and its clinical features is provided. The paper highlights the knowledge gaps and the epidemic risk potential for global spread of this emergent coronavirus (Azhar et al. 2016).

The current Zika virus large outbreak occurring in Pacific Ocean and the Americas, including the critical aspect for a coordinated response, is described by Bordi et al. Several aspects, such as the mode of transmission, the risks associated with pregnancy in infected mothers, the association of the virus with severe consequences, including fetal/newborn microcephaly and Guillain-Barré Syndrome in adults, are discussed in the paper (Bordi et al. 2016).

Animal models are essential for the study of emerging infections, to improve disease knowledge and for developing therapeutic drugs. Warner et al. describe the use of small animal models for the study of infectious diseases, with special focus on the Syrian golden hamsters emerged as an ideal animal model, due to their low cost, small size, ease of handling, and ability to accurately reflect disease progression in humans. In the paper, valuable information to researchers who are deciding whether to use hamsters as an animal model is provided (Warner et al. 2016).

The 2014–2015 Ebola virus outbreak in western Africa illustrates the threat coming from emerging infectious diseases and is perceived by the public as a preeminent global health problem. Nicastri et al. present the activities and the challenging issues encountered in terms of medical management of the patients, preparedness and response to the outbreaks, diagnostic and research challenges (Nicastri et al. 2016).

Highly infectious diseases can spread rapidly across borders through travel or trade, and international coordination is essential to a prompt and efficient response by bio-containment laboratories. A prioritization of high consequence viruses is essential to improve European laboratory preparedness for cross-border health threats. The strategy to identify priorities for a rational allocation of resources for research and surveillance has been the focus of a large body of research in recent years. The activities and the the strategy used by EMERGE, an European-wide consortium funded by the European Commission, are described in the paper by Nisii et al. (2016).

New emerging technologies are useful for detecting, tracking, reporting, forecasting, and improving early warning systems and proper response. To this regard, Al-Surimi et al. highlights and discuss the potential role of social media in preventing and fighting infectious diseases, summarizing the advantages and limitations of social media and Internet-based data for public health surveillance, in order to identify the gaps that still require further research and improvement (Al-Surimi et al. 2016).

The papers published in this special issue present exciting, insightful observations on emerging viral infections. In this rapidly developing field of study, interdisciplinary and challenging research, performed in both industrialized and resource-limited countries, can bring critically important information for life and social sciences, for public health, and for health care overall. The aim of this special issue is to contribute to the development of knowledge on emerging infection in the endless warfare between viruses and man. However, the articles included in this volume are not representative of the whole field of emerging infections, since they have been selected with the aim of presenting a point of view on uncovered issues or providing insights on key/hot topics for which scientific knowledge is rapidly evolving knowledge. Thus, our intention was not to conduct a systematic collection of all emerging infections, but to address specific issues that may be important in order to understand why and when a new agent may emerge, and how we may intervene in an effective way. We hope we succeeded, at least in part, in this difficult task.