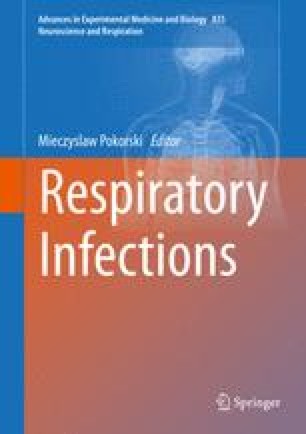 Respiratory Tract Infections in Children in Primary Healthcare in Poland

Respiratory infections: common cold, acute tonsillitis, acute rhinosinusitis, acute otitis media, flu-like illness, acute bronchitis, and pneumonia are the most common diseases in human beings including infants and children (Heikkinen and Järvinen 2003). Despite their general benign nature, they are a major cause of morbidity and mortality worldwide, and a significant burden on society (Wat 2004). Colds or non-specific upper respiratory tract infections (URTI) stand out from the above outlined ailments quite strikingly. The common cold is an acute, self-limiting viral infection of the upper respiratory tract. Typical symptoms include sneezing, nasal congestion and discharge, sore throat, cough, low grade fever, headache, and malaise (Heikkinen and Järvinen 2003). Rhinoviruses with over 100 serotypes and accounting for 30–50 % of common colds are the most common etiologic agents. Coronaviruses are responsible for 10–15 % and influenza viruses for 5–15 % of upper respiratory tract infections (URTI) (Zambon et al. 2001). While adults suffer from two to five common colds per year, infants and schoolchildren suffer from seven to ten common colds annually (Johnston and Holgate 1996). Although there are many possible complications, including sinusitis and middle ear involvement, nasal bleeding, and exacerbation of underlying chronic conditions like asthma, cystic fibrosis or chronic bronchitis, the infection is generally self-limiting and lasts up to 10 days (Fashner et al. 2012). Acute pharyngitis, a so-called sore throat, is a common element of respiratory infections. It is often the first symptom of URTI. When bacterial streptococcal etiology is suspected, acute tonsillitis is usually diagnosed. Acute rhinosinusitis is a symptomatic inflammation of the mucosa of the paranasal sinuses and nasal cavity. Uncomplicated rhinosinusitis, without any clinically evident extension of the inflammation outside the paranasal sinuses and nasal cavity, usually accompanies common colds (Wald et al. 2013). Acute otitis media is a viral or bacterial infection of the middle ear. Uncomplicated acute otitis media may accompany common colds. Many respiratory infections show a seasonal variation in incidence, for example influenza and respiratory syncytial virus (RSV) epidemics occur predominantly in the winter months, with a January–March peak (Wat 2004).

In Poland, primary healthcare for infants and children (below the age of 18 years) is provided by pediatricians or family doctors. In large cities, access to primary care is easy, free of charge, and children are usually cared for by a pediatrician. Respiratory infections are usually diagnosed clinically, based on symptoms. Although the symptoms of respiratory infection are well known by patients and their parents, and self-diagnosis with self-treatment is common, these infections are responsible for a significant number of primary healthcare visits. URTIs are treated mainly symptomatically, but use of antibiotics is quite common; a number of studies have documented a widespread use of antibiotics in outpatient clinics for putative viral URTIs (Mainous et al. 2003; Gonzales et al. 2001; McCaig and Hughes 1995). There are some indications that Polish primary care physicians also put overmuch desire into prescribing antimicrobials in respiratory infections (Windak et al. 1996; Touw-Otten and Johansen 1992).

The study protocol was approved by a local Ethics Committee and the personal data of all children were protected. We conducted a sample survey in a large primary healthcare establishment caring for about 2,000 children in the city of Wroclaw, Poland. We retrospectively analyzed the medical charts of 91 randomly-selected children (including 48 girls, 52.7 %) aged 0.7–17.1 years (3.9 ± 2.8 years, median 4.2, IQR 3.93). The age distribution in the study group is presented in Table 1.
Table 1

Age distribution in the study group

The selected primary healthcare establishment was staffed by three full-time pediatricians and characterized by a high staff turnover, i.e., many different physicians worked in the establishment during the period analyzed. Then we drew two letters from the alphabet and selected children with a family name beginning with those letters. Only children cared for from birth were included. Most patients were born in 2008 (20/91, 21.9 %). We analyzed the number of visits due to respiratory tract infections, the mean age at which the first infection occurred, and the type of infections. The number of infections treated with antibiotics was also assessed.

Categorical variables were reported as frequencies (%). Qualitative data were not normally distributed, which was confirmed by the Shapiro-Wilk test, and were presented as median, minimum–maximum (min–max), and interquartile range (IQR). Differences in the qualitative variables between groups was verified by the Wilcoxon rank-sum test or the Kruskall-Wallis rank-sum test. Independence of categorical variables was confirmed by the Fisher exact test. The Spearman rank correlation test was used to check correlations between the variables. The level of statistical significance was set at p < 0.05. The R 2.10.1 (for Mac OS X Cocoa GUI) statistical software was used for all data analyses.

The majority (57.4 %) of respiratory tract infection episodes were treated with antibiotics. The most common non-specific URTIs were treated with antibiotics in 25.8 % of cases. Antibiotics were prescribed in 90.7 % cases of acute tonsillitis, 67.5 % of bronchitis, 65.9 % of otitis media, 60.9 % of pneumonia, 22.2 % of laryngitis, and 12.5 % of sinusitis (Table 2). The annual antibiotic therapy indicators (number of antibiotic therapies due to a given diagnosis divided by child’s age at the study end) was highest in acute tonsillitis (median 0.38) as presented in Table 3.
Table 2

Annual indicators of therapy with antibiotics

There is relatively little information on the burden of respiratory tract infections in children in primary care and their treatment with antibiotics, which may be overused (Kardas et al. 2005; Windak et al. 1996). Fragmentary and incomplete information on the epidemiology of URTIs in children in Poland comes from single studies (Tranda et al. 2000). Polish recommendations regarding the treatment of respiratory tract infections are based mainly on international data (Commission on Respiratory Tract Diseases, Committee on Clinical Pathophysiology of the Polish Academy of Sciences 2008; Hryniewicz et al. 2010). That is why our study, although small and performed in a single center, adds valuable information on this subject. We estimate that URTIs are responsible for about two visits per year to primary care establishments in Polish children (median 1.8 per year in all age groups, 2.0 per year in the first 3 years of life). It is less than reported in the literature. According to the most commonly cited authors, infants and school children suffer from seven to ten common colds annually (Johnston and Holgate 1996). The explanation for this difference is self-treatment of generally benign URTIs, e.g., common colds without consulting a primary care physician. Since the symptoms of respiratory infection (sneezing, cough, or hoarseness) are well known by patients and their parents, self-diagnosis, followed by self-treatment, is common. Thus, the number of primary healthcare visits depends not only on the number of URTIs, but also on the threshold for consultation with a pediatrician, i.e., the willingness to consult the primary care physician and the ease of access to a healthcare establishment. Our results are more consistent with the results obtained in preschool children in Norway. In a study by Kvaerner et al. (2000), URTIs were most common at the age of 4. During the past 12 months, 47.7 % of children contracted more than two common colds, 9.5 % of children experienced more than one bout of acute otitis media, 6.9 % had more than one tonsillopharyngitis episode, and 3.2 % had rhinitis weekly or monthly.

The most important finding of our study is that the overuse of antibiotics may result in an increase in the total number of visits and the number of visits due to URTI. We found a strong positive correlation between the indicator of annual overall antibiotic therapies and specifically therapies due to URTI and the indicator for visits due to URTI. Similarly, the annual indicator of antibiotic therapies due to URTI correlates with that for the total number of visits to the healthcare establishment. These correlations do not imply a causal relationship, but along with the results of previous large-scale studies by Otters et al. (2004) and Fleming et al. (2003) a conclusion can be drawn that a reduction in unnecessary antibiotic treatment may decrease the number of visits due to URTI. Otters et al. (2004) found, in a Dutch national survey, that decreasing antibiotic prescription rates in children paralleled a decline in the incidence of respiratory tract infections in general practice. Fleming et al. (2003) showed that a decrease in antibiotic prescription rates is directly related to a decrease in respiratory infections presented in general practice. Other explanations, like a decrease in the occurrence of URTIs in the general pediatric population or an increase in the threshold for consulting a pediatrician, are less likely because, in our study, we compared the same population of children over the same time. Another possible explanation of this relationship may relate to the influence of parents; those with a lower threshold for consulting doctors may be the same parents who insist on antibiotic treatment.

With the exception of acute tonsillitis, where streptococcal etiology is frequent, and in a fraction of acute otitis media and acute rhinosinusitis, where bacteria play a role, the vast majority of URTIs in children are viral. Acute pharyngitis is often the first symptom of an upper respiratory tract infection. Acute otitis media is the most common condition for which antibiotics are prescribed for children in the U.S., although viruses were detected in most cases, with or without bacterial involvement. Virus RNA was detected in 75 % children (35 % rhinovirus, 28 % RSV, 17 % coronavirus, and 5 % dual) (Pitkäranta et al. 1998). In addition, middle ear effusion is commonly found in colds, but may not be clinically significant (Bollag et al. 1996). Uncomplicated rhinosinusitis, without clinically evident extension of the inflammation outside the paranasal sinuses and nasal cavity, usually accompanies common colds. Although acute bacterial sinusitis is a relatively frequent complication of viral URTI or allergic inflammation, it possibly affects only 6–7 % of children requiring medical care for respiratory symptoms (Wald et al. 2013).

The weakness of our study is a limited number of patients and the fact that the data were collected from a single primary healthcare establishment, where the personal preferences of a few doctors could strongly influence the results. To minimize the aforementioned negative impact we selected a large primary care practice characterized by a high turnover (i.e., many doctors working for short periods of time). Another weakness of our study is that diagnoses were based on clinical symptoms; however, that is a rule in general practice (Hryniewicz et al. 2010; Heikkinen and Järvinen 2003). Our study was retrospective with all the inherent biases, but the results are, in our opinion, more reliable than those originating from questionnaires.

Respiratory tract infections in children are responsible for a substantial amount of primary healthcare visits in Poland and antibiotics are overused in their treatment. Education about the rational antibiotic use and implementation of careful and responsible management of a rational use of antibiotics is urgently needed since reducing the number of antibiotic therapies may decrease the number of visits due to upper respiratory tract infections as well as the total number of primary healthcare visits.

The authors have no financial or other relationships that might lead to a conflict of interest.