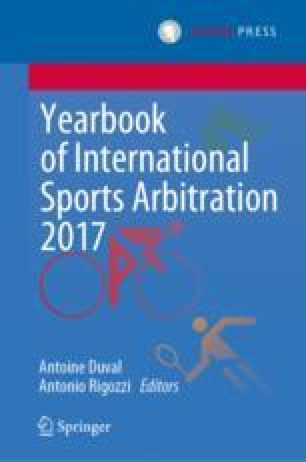 On first reading, case 2016/A/4708 Belarus Canoe Association and Belarusian Senior Men’s Canoe and Kayak Team Members v International Canoe Federation, award of 23 January 2017 (hereafter BCA v ICF) raises three familiar, deceptively simple, themes in anti-doping. Namely, the potential role of national criminal authorities in doping investigations; the relationship between those authorities and international sporting stakeholders; and the importance of those stakeholders adhering to their own rules when pursuing anti-doping allegations. This chapter addresses those aspects in detail, but the case has a significance that goes beyond anti-doping. Specifically, BCA v ICF raises wider issues about anti-doping actors whose obligations under the WADA regime cannot be easily reconciled with their reliance on governments that use sports as a tool for cronyism and furthering political agendas. Such is the case in Belarus, where the relationship between a supposedly independent national anti-doping authority and an ignoble and unhappy regime appears uncomfortably close. These concerns are compounded by sports federations which are only too happy to let Europe’s last dictatorship host their international events.

Thanks to the editors, to Marjolaine Viret and to Catherine Ordway for their comments on an earlier draft, but the errors are mine alone.