A Taste of Topology 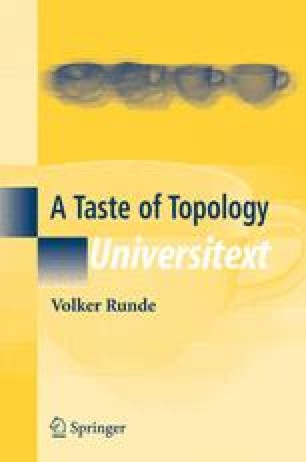 A grand theme in any mathematical discipline is the classification of its objects: When are two such objects “essentially the same”?

The dimension of a finite-dimensional vector space is what’s called a numerical invariant: a number assigned to each such vector space, which can be used to tell different spaces apart.

It would be nice if a classification of topological spaces could be accomplished with equal simplicity, but this is too much to expect. There is a notion of dimension for topological spaces (we have only encountered zerodimensional spaces in this book; see Exercise 3.4.10), and there are other numerical invariants for (at least certain) topological spaces. In general, however, mere numbers are far too unstructured to classify objects as diverse as topological spaces.

In algebraic topology, one therefore often does not use numbers, but algebraic objects, mostly groups, as invariants. To each topological space, particular groups are assigned in such a way that, if the spaces are “essentially the same”, then so are the associated groups.

Topological Space Convex Subset Fundamental Group Homotopy Type Algebraic Topology
These keywords were added by machine and not by the authors. This process is experimental and the keywords may be updated as the learning algorithm improves.
This is a preview of subscription content, log in to check access.