Trace Elements in Man and Animals 10 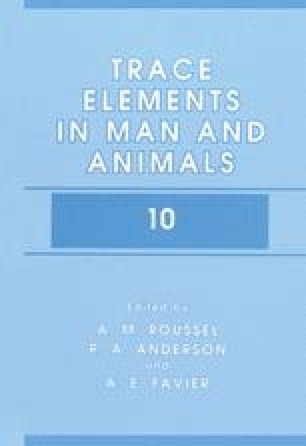 The serum zinc represents a small but highly dynamic pool which is significantly reduced within two days on a zinc-deficient diet; thus long before the first zinc deficiency symptoms like loss of appetite and growth depression could be observed. At his time the serum growth hormone concentration of the zinc-deficient rats was less by half, compared with both control groups. The growth promoting effect of growth hormone is largely mediated via insulin like growth factors like IGF-1 and by insulin. In this study led alimentary zinc deficiency in the first experimental days, before feedintake was reduced, to an increase of IGF-1, insulin and C-peptide. With the beginning of the reduction in feed intake and the development of alimentary zinc deficiency they began to decrease however. After prolonged zinc deficiency nutrition a decreased concentration of growth hormone and IGF-1 in the serum could be demonstrated again.

Feed Intake Zinc Deficiency Serum Zinc Growth Hormone Concentration Serum Growth Hormone Level
These keywords were added by machine and not by the authors. This process is experimental and the keywords may be updated as the learning algorithm improves.
This is a preview of subscription content, log in to check access.