An Archaeology of Manners 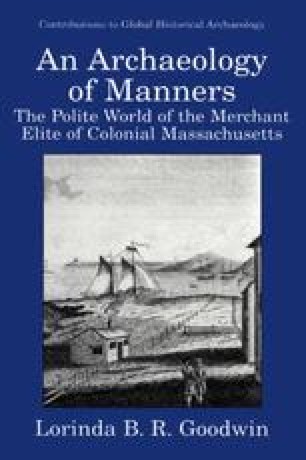 Introduction The Polite World of the Merchant Elite of Colonial Massachusetts

In the introduction to Learning How to Behave: A Historical Study of American Etiquette Books, Arthur Schlesinger wrote: The rise and progress of courtesy would, if for no other reason, merit interest as a sort of barometer of changing attitudes toward greater affairs, but it also deserves attention for its own sake as a functional trait of civilization. Manners, far from being apart from life, are veritably a part of life, revealing men’s hopes, standards and strivings. (1968: vii)

Manners are reflective of more than superficially polite encounters, but even though the “standards” Schlesinger mentions are written down in the form of courtesy works, without live informants, it becomes difficult to understand how manners shaped a distinctly American merchant elite. These rules were flexibly applied and subject to cultural interpretations. The present work demonstrates this fact: although examining a very small area of a much larger, very complex picture, the cultural canvas was repainted many times. The same subject was used but approached from a slightly different perspective each time.

As Lawrence Klein put it: “At its most aggressively synthetic, the language of politeness sought toimpose general order over large tracts of human experience, bringing its various referents into one interpretive scheme. The premises, criteria and standards of that scheme can be most easily grasped as expressions of an idealized vision of human intercourse” (1989: 587). In this way, mannerly behavior has provided a framework—an “idealized vision” or script, if you will—and merchants provided the cast, props, and settings. Like Madam Knight’s pronouncements and observations, manners provides the opportunity to observe a group and place their lives and actions within a specific frame of reference.

Material Culture Mannerly Behavior Polite Behavior Historical Archaeology Early Modern Period
These keywords were added by machine and not by the authors. This process is experimental and the keywords may be updated as the learning algorithm improves.

There will be a connection with the long past—a reference to forgotten events and personages, and to manners, feelings, and opinions, almost or wholly obsolete—which, if adequately translated to the reader, would serve to illustrate how much of old material goes to make up the freshest novelty of from the little-regarded truth that the act of the passing generation is the germ which may and must produce good or evil fruit in a far-distant time. — Nathaniel Hawthorne, The House of the Seven Gables

Cite this chapter as:
(2002) Introduction The Polite World of the Merchant Elite of Colonial Massachusetts. In: An Archaeology of Manners. Contributions to Global Historical Archaeology. Springer, Boston, MA. https://doi.org/10.1007/0-306-47170-1_1