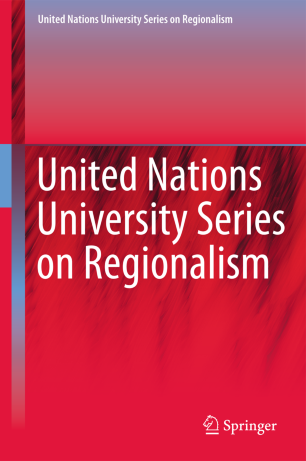 The United Nations University Series on Regionalism, launched by UNU-CRIS and Springer, offers a platform for innovative work on (supra-national) regionalism from a global and inter-disciplinary perspective. It includes the World Reports on Regional Integration, published in collaboration with other UN agencies, but it is also open for theoretical, methodological and empirical contributions from academics and policy-makers worldwide.

Book proposals will be reviewed by an International Editorial Board.

The series editors are particularly interested in book proposals dealing with:

- comparative regionalism;
- comparative work on regional organizations;
- inter-regionalism;
- the role of regions in a multi-level governance context;
- the interactions between the UN and the regions;
- the regional dimensions of the reform processes of multilateral institutions;
- the dynamics of cross-border micro-regions and their interactions with supra-national regions;
- methodological issues in regionalism studies.

Accepted book proposals can receive editorial support from UNU-CRIS for the preparation of manuscripts.