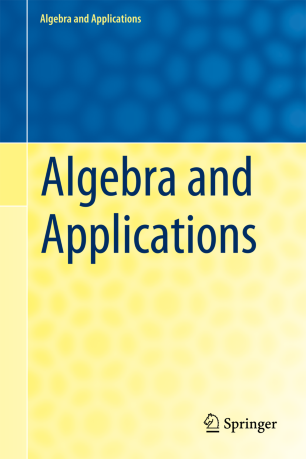 Algebra and Applications aims to publish well-written and carefully refereed monographs with up-to-date expositions of research in all fields of algebra, including its classical impact on commutative and noncommutative algebraic and differential geometry, K-theory and algebraic topology, and further applications in related domains, such as number theory, homotopy and (co)homology theory through to discrete mathematics and mathematical physics.

Particular emphasis will be put on state-of-the-art topics such as rings of differential operators, Lie algebras and super-algebras, group rings and algebras, Kac-Moody theory, arithmetic algebraic geometry, Hopf algebras and quantum groups, as well as their applications within mathematics and beyond. Books dedicated to computational aspects of these topics will also be welcome.
Announcement (30 November 2020)


Alain Verschoren (1954-2020), Professor of Mathematics and Honorary Rector of the University of Antwerp, became an editor of the Algebra and Applications series in 2000. His contribution to the development of the series over two decades was pivotal. We, the Springer mathematics editorial staff and the editors of the series, mourn his passing and bear him in fond and grateful remembrance.