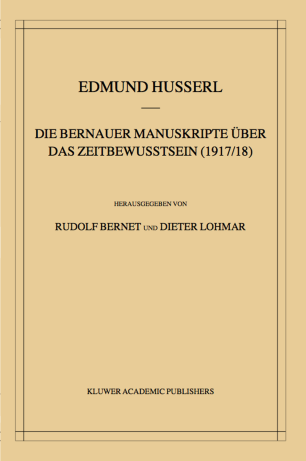 As part of the Husserliana, the Husserl-Archives in Leuven, Belgium, introduced a subseries entitled Materialien for the publication of manuscripts from the Nachlass of Edmund Husserl. This series is complementary to the existing series of Edmund Husserl - Gesammelte Werke and Dokumente.

This series will publish reliable transcriptions of unpublished manuscripts. In contrast with the Gesammelte Werke, the texts will not be arranged into titled parts, chapters, and paragraph, insofar Husserl did not do this himself, nor will supplementary texts be provided. The textual criticism will be limited to footnotes documenting only the most important textual changes and references. In the editor’s introduction information on the text’s history and editing will be given.

The reason for this new series is to make available certain texts from Husserl’s Nachlass which, although essential and historically instructive, will not be published in the Gesammelte Werke. First to be published are a series of lectures. Husserl usually worked out the greater part of his lectures in writing. In general, these lectures differ from the research manuscripts in that they are more accessible and more thematically complete in themselves, which makes them highly suitable for an introduction into Husserl’s phenomenology in general or into specific thematic fields. In addition, these lectures allow important conclusions to be drawn on the development of Husserl’s ideas. The lectures to be published in the new series will, for example, comprise lectures on logic and the theory of judgment from his Halle and Göttingen period, and also introductory lectures on epistemology, phenomenology and philosophy, as well as a lecture on Nature und Geist (nature and spirit) from his Göttingen period and his first Freiburg years.

Edited under the auspices of the Husserl-Archives, Louvain, Belgium.

Translators of Husserl’s texts (including parts thereof) must submit (samples of) their translation for review by the Husserl Archives in Leuven prior to publication.

Please note that translation rights in English are not available for the Husserliana Gesammelte Werke, Husserliana Dokumente or Husserliana Materialien.

Further information on Springer Rights and Permissions can be found here and the email address to request permission is bookpermissions@springernature.com.