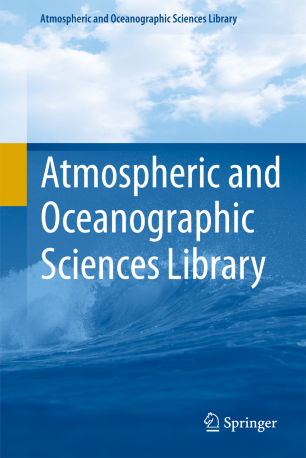 The Series has been discontinued. The Atmospheric and Oceanographic Sciences Library (AOSL) was dedicated to the publication of outstanding books relating to the fundamental aspects of the sciences of the atmosphere and oceans, as well as the interactions and feedbacks between these two important components of the climate system.  Books published in this series include: Diabatic Aspects of ENSO, The Climate of the Arctic, Surface-Based Remote Sensing of the Atmospheric Boundary Layer; Climate Time Series Analysis and Polar Oceans from Space. To date, 50 volumes have been published in the series. Volumes in the series may cover any aspects of the mathematics, physics and chemistry of the atmosphere and oceans. The series includes books of an interdisciplinary nature, among others, state-of-the-art reviews and analyses of the biogeochemical cycles in the ocean-atmosphere-land system, air-ice-ocean feedbacks and climate, ocean-cryosphere interactions, paleoceanography and climates of the past, atmosphere-land surface processes, hydro-meteorology and climate, and pollution effects on climate. In the past, several of the books in the AOSL have been used as textbooks in advanced undergraduate and graduate courses. Thus books in this series may include problems for the students and cover (i) different types of observations of the atmosphere and oceans, (ii) the dynamics of atmospheric and oceanic circulations, (iii) current research in specific phenomena related to a particular geographic area, (iv) analytical, data analysis and numerical techniques used by atmospheric and oceanic scientists.