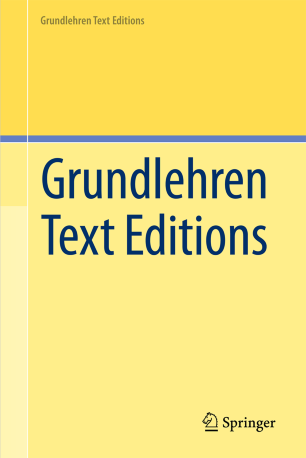 The series Grundlehren der mathematischen Wissenschaften, Springer's first series in higher mathematics, was founded by Richard Courant in 1920, and conceived as a series of modern textbooks. Its objective was to lead students to results and recent research questions in an elementary and easily readable book. Today, it is often no longer possible to start from the basics and, in a single book reach the frontiers of current research. As a result many later volumes became increasingly specialised and advanced.
The Text Editions of selected "Grundlehren" volumes have been specially adapted by the authors for use in graduate-level teaching and study. Some passages have been simplified and in other cases expanded for better comprehension. Further, exercises have been added. Volumes in this new series maintain a consistent level throughout so that students can use them to build on their knowledge of the various subject areas.