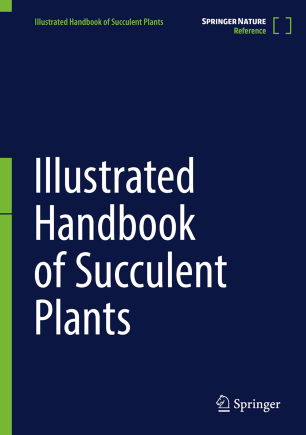 During evolution, many plant species have adapted to life in seasonally dry and arid environments by developing the ability to store water in their stems, leaves, and/or underground organs – this phenomenon is called “succulence.” Succulent plants can be found in more than 70 plant families. The Illustrated Handbook of Succulent Plants (excluding cacti and orchids) was first published in six volumes in 2001–2003. A second revised edition, of which the first volume (treating the family Aizoaceae) was published in 2017, provides a taxonomical treatment of all estimated 11,000 taxa of succulents (excluding orchids). In addition to the volumes on Monocotyledons and Dicotyledons, separate volumes are devoted to those families with an especially great diversity of succulent species, namely, Aizoaceae, Apocynaceae, Cactaceae, and Crassulaceae. Each volume is organized by alphabet of families, genera, and species, with comprehensive synonymies added at all levels. Detailed descriptions are given for all accepted taxa, together with data on the distribution and typification, and references to the most important literature. Where necessary, information on ecology, ethnobotany, history, etc. is added, and in many places, proposed relationships are critically discussed. Over 2000 superb color photographs complete this inventory of succulent plants.