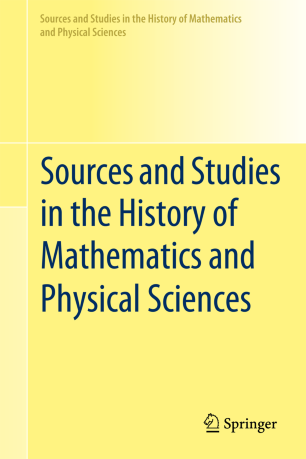 Sources and Studies in the History of Mathematics and Physical Sciences

Sources and Studies in the History of Mathematics and Physical Sciences was inaugurated as two series in 1975 with the publication in Studies of Otto Neugebauer's seminal three-volume History of Ancient Mathematical Astronomy, which remains the central history of the subject. This publication was followed the next year in Sources by Gerald Toomer's transcription, translation (from the Arabic), and commentary of Diocles on Burning Mirrors. The two series were eventually amalgamated under a single editorial board led originally by Martin Klein (d. 2009) and Gerald Toomer, respectively two of the foremost historians of modern and ancient physical science. The goal of the joint series, as of its two predecessors, is to publish probing histories and thorough editions of technical developments in mathematics and physics, broadly construed. Its scope covers all relevant work from pre-classical antiquity through the last century, ranging from Babylonian mathematics to the scientific correspondence of H. A. Lorentz. Books in this series will interest scholars in the history of mathematics and physics, mathematicians, physicists, engineers, and anyone who seeks to understand the historical underpinnings of the modern physical sciences. All works are reviewed to meet the highest standards of scientific literature.
Titles from this series are indexed by Scopus.