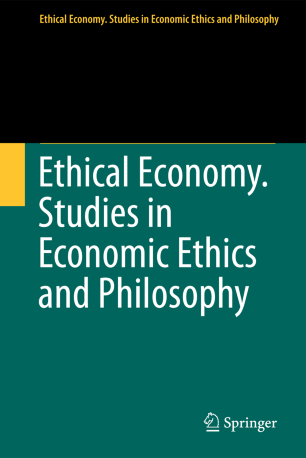 Studies in Economic Ethics and Philosophy

Ethical Economy describes the theory of the ethical preconditions of the economy and of business as well as the theory of the ethical foundations of economic systems. It analyzes the impact of rules, virtues, and goods or values on economic action and management. Ethical Economy understands ethics as a means to increase trust and to reduce transaction costs. It forms a foundational theory for business ethics and business culture.
The Series Ethical Economy. Studies in Economic Ethics and Philosophy is devoted to the investigation of interdisciplinary issues concerning economics, management, ethics, and philosophy. These issues fall in the categories of economic ethics, business ethics, management theory, economic culture, and economic philosophy, the latter including the epistemology and ontology of economics. Economic culture comprises cultural and hermeneutic studies of the economy.
One goal of the series is to extend the discussion of the philosophical, ethical, and cultural foundations of economics and economic systems. The series is intended to serve as an international forum for scholarly publications, such as monographs, conference proceedings, and collections of essays. Primary emphasis is placed on originality, clarity, and interdisciplinary synthesis of elements from economics, management theory, ethics, and philosophy.

The book series has been accepted into SCOPUS (March 2019) and will be visible on the Scopus website within a few months.